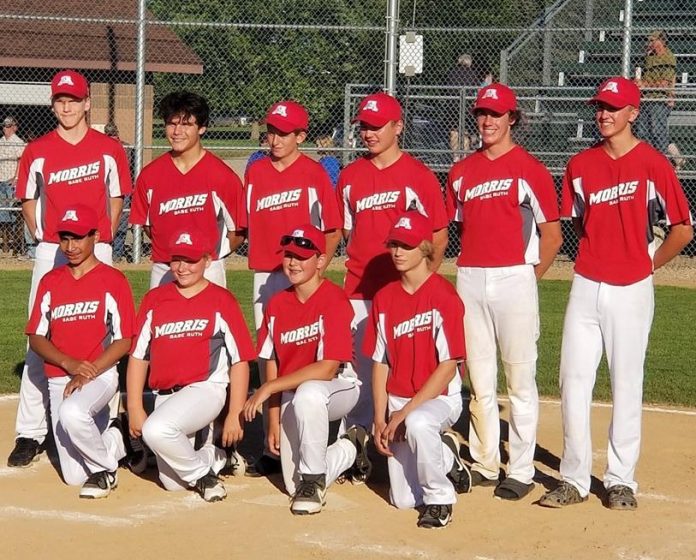 BABE RUTH CHAMPIONSHIP
Red 13, Blue 3 (6 inn)
MORRIS – The Red team opened with a five-run first, and closed the game out with a six-run rally in the sixth to defeat Blue 13-3 and win the Babe Ruth League championship on Monday from Chizek Field.

Zach Bruns went 3-3 with three RBI’s and two runs, hitting a two-run home run in the first and falling a triple shy of the cycle while Brett Hansen tossed 3.1 innings of hitless relief for the win.

After Blue failed to score with the bases-loaded in the first inning, Red roared out to a 5-0 lead in the bottom half. Blue started chipping away though, scoring three runs over the next two innings to get within two, but Red added a pair of unearned runs in the third and Hansen shutdown the Blue lineup over their final three at-bats.

Blue would’ve had one more chance, trailing 7-3, and one out away from batting in the seventh, but a throwing error kept the inning alive for Red, who went on to draw two walks and string together six hits, scoring six and ending the game due to the 10-run-rule.

Noah Amundson was 3-3 with two RBI’s and two runs, Tim Blume drove in two and scored twice while pitching 2.2 innings for a no-decision.