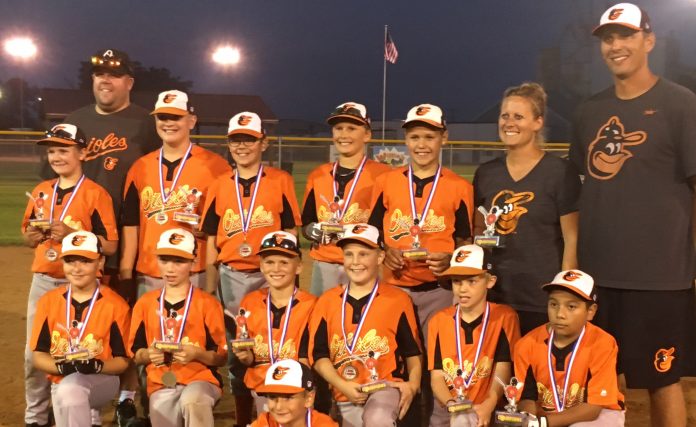 LITTLE LEAGUE CHAMPIONSHIP
Orioles 2, Mets 1 (8 inn)
MORRIS – Landen Gibson’s two-run single in the bottom of the eighth gave the Orioles the Little League title with a 2-1 win over the Mets on Friday night from Wells South.
After seven scoreless innings full of missed scoring opportunities and big time pitching performances, the Mets broke through in the top of the eighth when Drew Huebner banged a double off the fence, three batters later Jack Kehoe doubled in a run to take a 1-0 lead.
The Orioles, who had gone 13 innings without a run on the night, answered by loading the bases with no outs in the bottom half. After a dropped pop-up turned into the potential game-tying run getting thrown out at home, Gibson ended the game with a sharp single up the middle to score two.
Gibson got the win, allowing a run on three hits with five strikeouts over three innings. Riley and Alex Asmus combined for five shutout innings, striking out 13. Riley was 2-2 with a run and two walks at the plate.
Jacob Volker and Drew Huebner combined to throw six scoreless innings on six hits with 12 strikeouts for the Mets, Drew Huebner took the loss. Drew was 2-2 with two doubles, a run and walk at the plate.

Mets 2, Orioles 0
MORRIS – Hunter Westerman’s RBI single in the fourth inning was all the Mets pitchers needed in a 2-0 win over the Orioles in game one to force a decisive second game.
Jacob Volker earned the win, combining with Drew Huebner for six shutout innings on a hit, striking out 12.
Riley Asmus allowed two runs on two hits over two innings and took the loss. Landon Gibson and Alex Asmus combined for four shutout innings, and their were nine strikeouts recorded between the three of them.