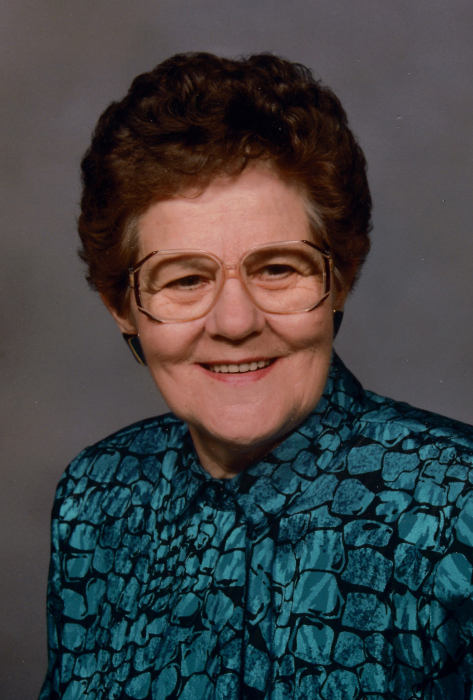 Dorothy Nieland, age 94, formerly of Hoffman, passed away at the Alex Assisted Living on Friday, July 20, 2018.

Memorial Service for Dorothy Nieland will be held at 11:00 a.m. Saturday, August 18, 2018 at Zion Lutheran Church, Hoffman, MN.  Visitation one hour prior to services at the church service.

Dorothy Mae (Hendrickson) Nieland was born at home on August 15, 1923, to Ted and Mabel (Nelson) Hendrickson, rural Hancock, Minnesota. The family attended West Zion Lutheran Church where Dorothy was baptized and confirmed. She attended country school through eighth grade and enjoyed all of her studies and was an avid reader. Her parents boarded the school teacher (Lailah Peacock) for a couple of years and Dorothy considered Miss Peacock her favorite teacher. She attended one year of high school in Hancock.

On December 28, 1941, Dorothy was united in marriage to Ralph Nieland. Twelve children were born into their family. Ralph and Dorothy spent the majority of their years together farming near Kensington on Red Rock Lake. During the 1970s, they sold the farm and moved into Hoffman. Dorothy spent many years serving the elderly at Bethany Home in Alexandria and the Barrett Care Center as a nurse’s aide. After retiring, she continued to invest many hours volunteering at the nursing home in Hoffman.

Dorothy’s early interest in reading continued throughout her life. She also was accomplished in needlework, creating beautiful bedspreads, pillows and dish towels that she shared with her friends and family. Having raised a large family on the farm, she knew how to cook a delicious meal and top it off with a yummy dessert!

After Ralph’s death in 1991, Dorothy spread her wings and did a bit of traveling. She enjoyed bus trips with friends, a cruise with family members, and road trips to visit out-of-state children. Closer to home, she was always willing to attend events and holiday gatherings with her ever-growing family. Coffee with friends, gardening, American Legion activities, and more kept her life full and busy.

Dorothy was able to stay in her own home in Hoffman until 2014 when at the age of 91 she decided it was time to move to an apartment. A broken hip in 2016 brought her to the stage of life where she needed more help. She passed away at the Alex Assisted Living on July 20, 2018, at the age of 94.

Assisting the family with arrangements is Erickson-Smith Funeral Home of Hoffman, MN