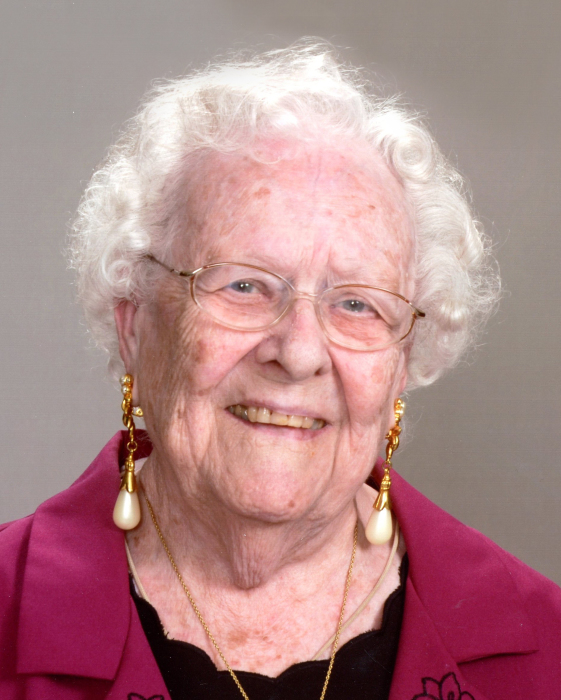 Madelyn Schmidt passed away Friday, August 3, 2018 at West Wind Village in Morris. She was 95 years old.

Funeral services for Madelyn Schmidt of Morris, MN will be Tuesday, August 7, 2018 at 10:30 a.m. at Assumption Catholic Church in Morris, with Father Stan Wieser officiating. Visitation will be Monday from 4 to 7 p.m., with a prayer service at 6:30 and rosary to follow at the Pedersen Funeral Home in Morris and for one hour prior to services at the church on Tuesday. Burial will be in Calvary Cemetery in Morris.

Madelyn Claire Daily, daughter of George and Phoebe (McIlraith) Daily, was born June 17, 1923 in East Grand Forks, Minnesota, where she was baptized on June 24, 1923 by Father Klinkhammer. Madelyn grew up in East Grand Forks, Hill City, Alexandria and St. Cloud, where she graduated from Cathedral High School in 1941. Madelyn then began working at North American Creamery Inc. in Morris. On June 5, 1946, she was united in marriage to Francis “Fritz” Schmidt at Assumption Catholic Church in Morris by Father Fearon. The couple continued to live on the family farm and eventually purchased it from Fritz’s dad. Madelyn then began working as a cook at the Morris Elementary School. Madelyn and Fritz retired from farming in 1982, but stayed on the farm until 2009, when they moved into Morris.

Madelyn was a lifelong member of Assumption Catholic Church in Morris and the Morris V.F.W. Auxiliary.  She enjoyed playing cards, reading and watching the Buzzer TV channel.