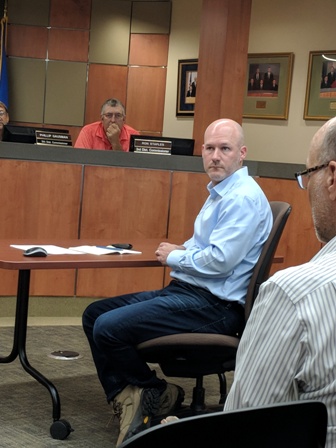 The Stevens County Board of Commissioners heard a proposal at this week’s board meeting from Chicago-based AmpAmericas for a $30 million biogas renewable energy project at Riverview Dairy. The project has backing from the City of Morris and the University of Minnesota-Morris. It would involve using now-idle digesters at Riverview to turn cow manure into useable transportation fuel. Andy Dvoracek is with Camco, a key player in the project out of Colorado, and told the Commissioners that most of the gas produced by the project would likely be used in the county.

Amp’s CEO Grant Zimmerman said the plan would reduce greenhouse gas emissions by 100,000 metric tons of CO2 each year, an amount equivalent to taking 20,000 cars off the road. It’s anticipated the project would create up to 10 local construction jobs and 5 permanent jobs.

The companies involved were hoping for the County to grant Right-of-Way privileges along county roads for their pipeline. But County Attorney Aaron Jordan said the first step is for the companies to supply a formal written request for such a Right-of-Way for the Board to consider, before it is sent for a public review.