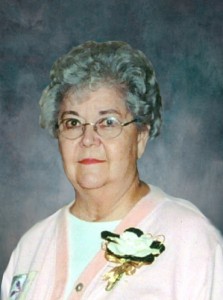 Memorial services for Louise Rasmusson of Morris, MN will be Thursday, August 30, 2018 at 2:00 p.m. at Our Redeemer’s Lutheran Church in Hancock, MN, with Reverend Julius Miller officiating. Visitation will be Wednesday from 4 to 7 p.m., with a prayer service at 6:30 p.m. at the Pedersen Funeral Home in Morris and for one hour prior to services at the church on Thursday. Burial will be in Scandia East Cemetery, near Cyrus.

Louise Rasmusson was born Clara Louise Sanders to Edwin and Edith (Swenson) Sanders, on July 10, 1929 in Wittenberg Hospital in Williston, North Dakota.  She was the youngest of three children.  She was baptized at Rawson Lutheran Church, Rawson, North Dakota.  One of her constant companions was her uncle Albert, her father’s brother who had homesteaded nearby.  Louise attended Arnegard Public School, graduating in 1947.  She went on to Concordia College, Moorhead, MN and graduated with a Bachelor of Arts Degree in Home Economics in 1951. She taught Home Ec in Plentywood, Montana for one year.  Louise then took classes at the University of Minnesota, St. Paul and Montana State University in Bozeman, MT.  She interned in dietetics at Barnes Hospital in St. Louis, Missouri and became a Registered Dietitian.

She married Douglas Rasmusson on August 28, 1954.  The happy couple settled on the shore of Long Lake in Hodges Township, MN.  They had three children: Andrea, Jeffrey and Clayton.  Throughout her life, she was interested in baseball, an avid Minnesota Twins Fan; playing cards, especially bridge, traveling and was very active member of Our Redeemer’s Lutheran Church.

Douglas passed away May 22, 2005.  One year later, Louise moved from the farm to an apartment in Hancock, MN.  Louise later relocated to the Courage Cottage in Morris, MN where she continued to live until the time of her death