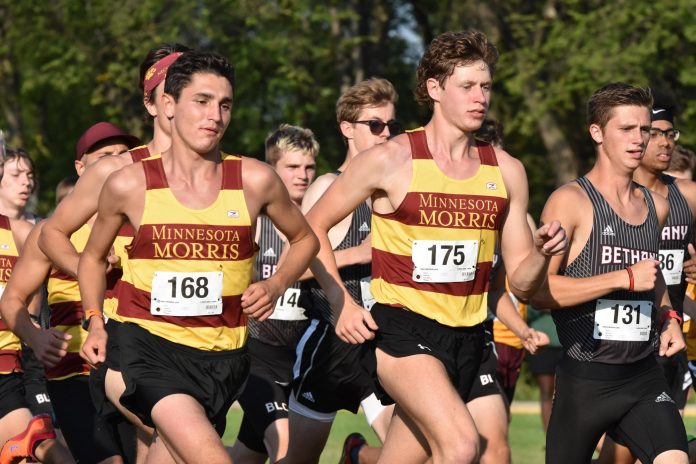 MEN’S CROSS COUNTRY
Cobber Invite
MOORHEAD, Minn. – In sticky conditions, the Minnesota Morris men’s cross country team began their 2018 season Friday at the Cobber 5K in Moorhead. The Cougars came through with a second place team finish with 60 points. Concordia-Moorhead took the team crown with 36 points.
Pacing the Cougars was senior Tyler Sassenberg who had the best Cougar effort with a seventh place time of 17:08.7. Ryan Anderson and Benjamin Barnack were two seconds apart as they came in 10th (17:32.5) and 11th (17:34.1), respectively. Raymond Abraham (17:47.5, 15th) and Gabriel Davila (17:53.2) closed out the Cougar scoring. Minnesota Morris next competes September 22 at the St. Olaf Invitational in Northfield.

WOMEN’S CROSS COUNTRY
Cobber Invite
MOORHEAD, Minn. – Senior Katherine Novak’s runner-up finish helped the Minnesota Morris women’s cross country team take a second place finish Friday at the season-opening Cobber 5K in Moorhead.
Novak was in a dual with Concordia-Moorhead’s Kara Andersen down the back stretch of the 5,000-kilometer race. The two sprinted to the finish line with Andersen narrowly edging out Novak at the line. Andersen’s time of 20:16.1 was three-tenths of a second better than Novak’s 20:16.4.
Minnesota Morris scored 44 team points to place second behind Concordia’s 19. Bethany Lutheran placed third with 85 points.
Paige Stearns (22:01.8) and Alexa Yeager (22:04.7) finished 11th and 12th for the Cougars, respectively. Also placing in the top 20 for UMM were Arre Langer (23:12.5, 17th), Kelsey Menze (23:22.4, 19th), and Kaitlyn Ladwig (23:26.0, 20th). Minnesota Morris is off until September 22 when they compete at the St. Olaf Invitational in Northfield.

MEN’S SOCCER
Carleton College 1, UMM 0
NORTHFIELD, Minn. – The Minnesota Morris men’s soccer team forced an overtime session on the road in their season opener Friday at Carleton, but the Knights scored nearly ten minutes into the extra period to down the Cougars, 1-0.
Playing in his first collegiate contest, freshman goalkeeper Jake Peterson kept the Cougars in the contest stopping all six shots he faced through the first 90 minutes and one more in the overtime period.
Carleton attempted 26 shots with the final shot going into the net on an unassisted goal from Marco da Cunha in the 100th minute.
The Cougars had a chance to go ahead in the 83rd minute, but Corbin McCall’s shot was saved by the Carleton goalkeeper.
Minnesota Morris (0-1) returns to Morris for their home opener Sunday at noon against Webster University from St. Louis, Mo. at the Cougar Soccer Field.

VOLLEYBALL
UMM 3, DePauw 0
WHITEWATER, Wis. – The Minnesota Morris volleyball team faced stiff challenges Friday at the season-opening UW-Whitewater Invitational. Both of their opponents, DePauw and UW-Whitewater, received votes in the AVCA Preseason Top 25 Poll. First-year head coach Joe Sussenguth was able to guide his Cougars to a sweep over DePauw in the opener, but then fell to the host Warhawks in four sets in the nightcap.
The Cougars went overtime to take the first two sets from DePauw by scores of 26-24 and 30-28. In the opening stanza, UMM raced out to an 8-1 advantage with the help of two Tori Everson aces and two Mia Frick kills. DePauw pulled within two at 12-10 before the Cougars rattled off four straight. DePauw staved off two set points to tie it at 24. Kills from Brenna Tinjum and Layne Herrmann closed out the opening set in favor the Cougars.
The second set was a back-and-forth affair until the Cougars took a 14-11 edge. The lead extended to five at 21-16 following back-to-back kills from Rachel Mathias. DePauw fought back again to take a 24-23 lead. Everson and Morgan Miller blocked a set point attempt. UMM staved off two more set points before closing out the set with three straight points.
The Cougars had a much easier time of it in the third set to close out the sweep with a 25-13 win. Six different Cougars recorded at least four kills with Mathias delivering 10. Herrmann led in both assists (28) and digs (9).

UW-Whitewater 3, UMM 1
Against UW-Whitewater in the second match, the Cougars dropped the first set, 25-20, before evening the match with a 26-24 win in set two. The Cougars spotted the Warhawks four points in the second set before rattling off 10 of the next 11 points to take a 10-5 lead. The lead grew to 22-13 following a Tinjum kill. UWW followed with a big run of their run to pull within one at 23-22. A Mathias kill and a UWW error knotted the match at 1.
The Warhawks pulled away to take the third set, 25-22, and then closed out the match with a 25-19 win in the fourth.
Mathias led the Cougars again with 11 kills. Herrmann totaled 32 assists and Alyssa Ukestad tallied 15 digs.
Minnesota Morris (1-1) returns to the UWW courts Saturday for matches with UW-Platteville at noon and Franklin at 2 p.m.