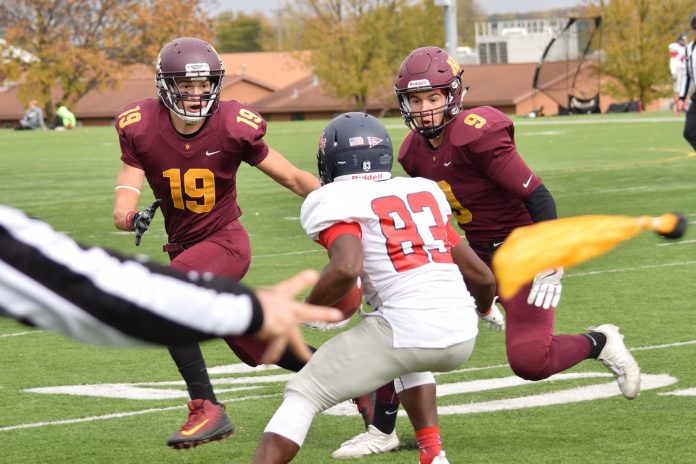 FOOTBALL
UW-River Falls 41, Cougars 0
RIVER FALLS, Wis. – Last season, the Minnesota Morris defense forced 23 turnovers over 10 games, an average of 2.3 per game. In Saturday’s season-opening game at UW-River Falls, the Cougar defense forced five Falcon turnovers in non-conference football action.
Despite the turnovers, UW-River Falls was able to put 41 points on the board in defeating the Cougars, 41-0.
The Cougars were able to move into Falcon territory twice in the opening quarter, but came away with no points. UMM drove 59 yards on 10 plays on their opening drive. On a fourth-and-3 from the UWRF 7, Falcon defender Alex Wood intercepted a pass in the end zone. On the Cougars’ next possession, UMM reached the UWRF 29 before getting stopped on another fourth down attempt.
UMM’s defense held the Falcons scoreless in the first quarter. The Falcons would break the scoreless tie early in the second quarter as Sam Altena scored the first of his three rushing touchdowns as the Falcons would score 28 second quarter points to take command.
Four of UMM’s five forced turnovers came in the second half. Early in the third quarter, Brady Jergenson forced a fumble that Preston Fifarek recovered as the Falcons’ were driving deep into Cougar territory. In the fourth quarter Jared Oviok cut in front of a swing pass to make an interception. Patrick Murphy recovered a fumble on UWRF’s next possession. Later Fifarek recovered another fumble.
Last season’s UMAC leading tackler Drew Shipley led the Cougars with 15 stops. Fifarek and Cole Kvistero added nine each.
Minnesota Morris (0-1) heads west to North Dakota for another non-conference game at Valley City State next Saturday.

VOLLEYBALL
UMM 3, UW-Platteville 2
WHITEWATER, Wis. – The Minnesota Morris volleyball team will have a good time on their seven-hour-plus bus ride back to Morris after winning their final two matches of the UW-Whitewater Tournament, topping UW-Platteville in five sets and closing with a sweep of Franklin.
In their opening match of the day, the Cougars dropped the first set to the Pioneers of UW-Platteville, 25-21. They would win the following two sets (25-19 and 25-16) to take an edge in the match. In the second set, the Cougars jumped out to a 20-9 lead. The Pioneers pulled to within five at 23-18 before a Whitney Schwartz kill closed out the set. In the third, a 6-0 UMM run fueled a surge to a match lead. They ended the frame scoring seven of the final eight points.
The Pioneers took the fourth set, 25-19, to force a deciding set. Kills from Rachel Mathias, Tori Everson, and Layne Herrmann were part of a 5-0 Cougar spurt that gave them an 11-6 lead. UW-Platteville countered with their own 5-0 run to take it at 11. Teams traded the next six points. Back-to-back kills from Hailey Remme and Everson capped a 16-14 fifth set and exciting win for the maroon and gold.
Mathias led three Cougars in double figures with 16 kills. Herrmann added 36 assists. Alyssa Ukestad and Allison Yang collected 16 and 15 digs, respectively.

UMM 3, Franklin 0
The Cougars had a much quicker time of things against Franklin, taking the match in straight sets by scores of 25-23, 25-23, 25-16. With the first set tied at 23, a Schwartz kill and a Franklin error gave UMM the first set. In the second set, with the Cougars trailing 23-22, A Remme kill was book-ended by kills from Everson to give the Cougars another tight set win. The third set was all Cougars as they led by at least five for most of the stanza.
Everson collected a double-double with 14 kills and 11 digs. Herrmann, who was named to the UW-Whitewater All-Tournament Team, added 34 more assists.
Minnesota Morris (3-1) is on the road again Tuesday for a match at Bethel.