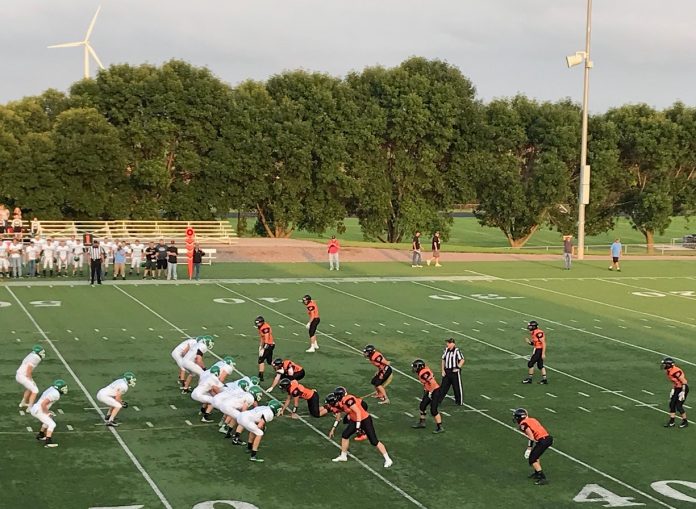 FOOTBALL
Morris Area/Chokio-Alberta 44, Holdingford 21
MORRIS – Morris Area/Chokio-Alberta erased an early 13 point deficit by scoring 38 unanswered points, earning a 44-21 win over Holdingford in the season opener from Big Cat Stadium in Morris.
After a couple of short touchdown runs by the Huskers, the Tigers answered with two Matt McNeill touchdown runs, a fumble recovery for a score by Austin Berlinger, and two defensive safeties.
Camden Arndt had a 38-yard touchdown run, finishing with 101 yards on the ground to go with a 27-yard touchdown reception. McNeill finished with 110 rushing yards on 17 carries, and Kenny Soderberg put an exclamation point on the win with a 90-yard kickoff return for a touchdown.
The Tigers had 348 yards of total offense, holding the Huskers to 202 yards of offense.

Breckenridge 34, West Central Area/Ashby 20
BARRETT – Cooper Yaggie tossed three touchdowns and Caden McGough contributed in three phases of the game for Breckenridge who earned a 34-20 win over West Central Area/Ashby on Friday in Barrett.
The Cowboys put the game away with 13 unanswered points late after a back-n-forth contest. Yaggie finished with 200 yards passing on 9-14 passing, McGough ran for 89 yards on 13 carries, caught three passes for 52 yards and a 26-yard touchdown reception, and added a 38-yard punt return touchdown.
Jaden Norby led the Knights offensively with 150 yards and a touchdown on 17 carries, Braden Overson had a 41-yard touchdown run, and Tanner Bennett anchored the defense with 13 tackles.

Verndale 20, Brandon-Evansville 14
VERNDALE – Verndale’s Tate Bounds threw a touchdown pass to Quinn Kern with 1:30 remaining in the game and the Pirates outlasted Brandon-Evansville 20-14 on Friday night.
Another classic between these two heavyweights again goes to the Pirates, who handed the Chargers their only two losses in 2017, including a win in the section championship.
Marshall Riedel led the Chargers on offense, rushing for 117 yards and two scores on 17 carries. Keagen Schiele ran for 87 yards, throwing for 106 with no touchdowns and one interception, Tanner Bitzan had four catches for 70 yards and the Chargers outgained the Pirates in total offense 297-258. Schiele led with seven tackles on defense, Riedell had an interception. Bounds finished with 133 passing yards, two touchdowns and a pick for the Pirates.

Wheaton/Herman-Norcross 29, Bertha-Hewitt 14
WHEATON – Wheaton/Herman-Norcross scored 29 unanswered points to defeat Bertha-Hewitt 29-14 in their season opener on Friday night.
Quarterback Nelson Schmidt did most of his damage on the ground, running for 101 yards and a score, throwing for another to James Conroy.
With the game tied at 14 in the third quarter, the Warrior defense came up big when Spencer Ellison scooped up a fumble and returned it 12-yards for the go-ahead score. Alex Johannson’s eight-yard touchdown run helped the Warriors create some space. Johannson finished with 40 yards on seven carries. Both teams struggled with ball security, with 10 combined turnovers. The Warriors defense forced five fumbles and an interception.