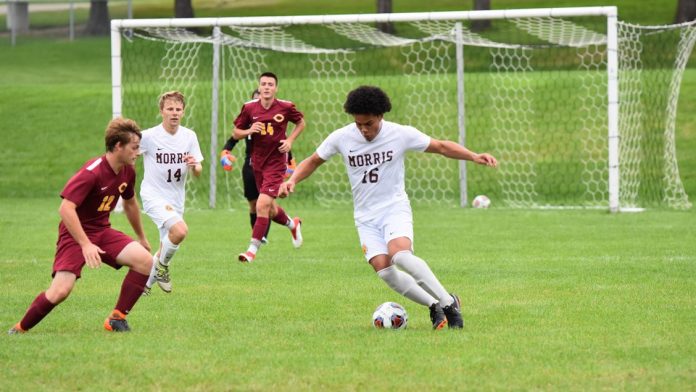 VOLLEYBALL
Bethel 3, UMM 1
ARDEN HILLS, Minn. – A busy start to the 2018 season continued Tuesday for the Minnesota Morris volleyball team as they traveled to Arden Hills for a non-conference match at Bethel. The MIAC school proved too much as they topped the Cougars in four sets (20-25, 25-22, 22-25, 16-25).
The Cougars dropped the first set, but bounced back to even the match following a 25-22 win in the second set. A 5-0 run gave UMM a 7-3 edge early on. The Royals came back to tie the set at 14 then took an 18-17 lead. The Cougars scored five of the next seven points to take a 22-20 edge. A kill from Morgan Miller put the Cougars on the brink of a set win then a Bethel error gave UMM the set win.
Bethel took a back-and-forth third set with a late rally then took the fourth set to win the match.
Tori Everson led three Cougars in double figures with 11 kills. Whitney Schwartz and Rachel Mathias added 10 each. Layne Herrmann dished out 49 assists to go along with 15 digs. Alyssa Ukestad led with 28 digs and Everson added 20.
Minnesota Morris (3-2) heads west for a weekend tournament at Colorado College in Colorado Springs.

MEN’S SOCCER
Concordia 4, UMM 1
MORRIS, Minn. – Minnesota Morris hosted their second game in three days Tuesday afternoon as Concordia-Moorhead visited Morris for a men’s soccer non-conference matchup. The Cobbers led at halftime and grew on the lead in the second half to hand the Cougars a 4-1 setback.
Concordia’s Aronah Mukhtar scored the first of his two goals in the 22nd minute on a striker in the upper left corner of the net. Concordia would take that 1-0 lead into halftime.
Nate Weaver connected on goals 15 minutes apart in the second half that gave the Cobbers a 3-0 advantage. The Cougars got on the board in the 71st minute as Hugo Castaneda scored his goal of the season off a corner feed from John Hoff. Mukhtar finished the scoring in the 86th minute to give the game its final score.
Matt Marshall made three saves in net for the Cougars. Minnesota Morris (0-3) heads out on the road for their next contest, Friday at Augsburg.

WOMEN’S SOCCER
Hamline 8, UMM 0
MORRIS, Minn. – After spending the holiday weekend Milwaukee for their season opener, the Minnesota Morris women’s soccer team played in front of the home fans for the first time in 2018 Tuesday as they entertained Hamline in a non-conference matchup. A tight game at the half turned into an 8-0 win for Hamline.
Goalkeeper Megan Tschida kept the Cougars in the game in the first half. She saved six Piper shots while only letting one goal in (13th minute) as Hamline led 1-0 at the break. Hamline powered things on the offensive end in the second half. They scored four goals in an eight-minute span early on to take a comfortable advantage.
Minnesota Morris (0-2) travels to the twin cities Friday for a non-conference game at St. Catherine.