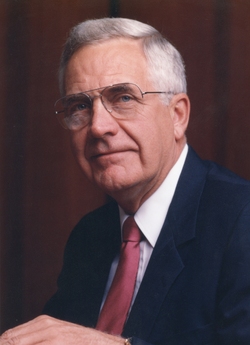 A Mass of Christian Burial will be held Friday, September 14, 2018 at 11:00 a.m. at the Herman Community Center in Herman, Minnesota with Fr. David Blume Celebrant.

Visitation will be held Thursday, September 13th from 5:00 p.m. until 7:00 p.m. with a 7:00 p.m. Prayer Service and Time of Sharing at the Herman Community Center. Visitation will continue Friday morning, one hour prior to service time at the community center.

Burial will be in Lakeside Cemetery, Herman.

Edward Ormbreck Ellison was born on the family farm in Delaware township on September 11, 1935. His parents were Ernest and Evelyn (Ormbreck) Ellison.  The family moved to Elbow Lake Township where Ed attended school at the “Pikop” country school and later Elbow Lake high school. In 1950 the family moved back to Delaware township where he graduated from Herman high school in 1953. It was here that the new boy with a car attracted the attention of Barbara Newberger. After Ed attended Hamline University in St. Paul, Ed and Barb were married on April 14th, 1955.

Ed and Barb started life together in the same house that he was born in, 7 miles northeast of Herman. They and their 4 children were blessed to be part of a multi-generational family farm living near his parents and his grandparents, Charles and Roxy Ellison.

Ed was a lifelong farmer. He loved everything about the farm. He was an eager adopter of new technology and was running precision farming equipment past his 80th birthday. His last time in a combine was the fall of 2017 and we are sure that he was planning on being back in 2018.

Ed was an active member of St. Charles Catholic Church. He was also a community and cooperative leader. After serving on the board of the Herman Market Company, he was elected to the GTA board in 1978. Ed was instrumental in guiding the company through successive mergers into what is now CHS Inc. He had various leadership roles and ultimately served 5 years as Chairman. In his role as director, he traveled extensively both domestically and internationally. He was also involved with such organizations as AURI, Minnesota Association of Cooperatives, Agricultural Cooperative Development International and others. He was a founding member of the Herman Booster club, served on the Herman city council, Neimackl Lake Park board, Agassiz Flyers, Herman Investors, and was an enthusiastic worker for many local organizations.

Ed’s family was the most important part of his life. He was a great Dad and by example taught his children how to be responsible adults. He loved being around his grandchildren and was thrilled to welcome a great granddaughter in 2017. He was proud of his extended family of in-laws, cousins, step grandchildren, nieces and nephews, and many friends that were family to him.

He was preceded in death by his parents, Ernest and Evelyn and brother Dale Ellison of Alexandria, MN.

The Bainbridge Funeral Home of Herman, Minnesota is in charge of arrangements.