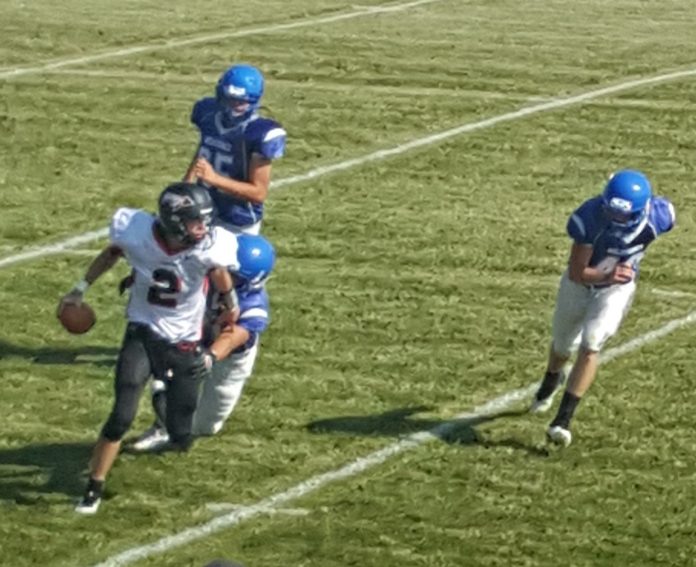 FOOTBALL
Morris Area/Chokio-Alberta 49, Montevideo 21
MONTEVIDEO – Camden Arndt and Zach Bruns each accounted for four touchdowns to lead Morris Area/Chokio-Alberta to a 49-21 win over Montevideo.
Arndt opened the scoring with an 11-yard touchdown pass to Jaret Johnson, caught two touchdowns of 34 and 82 yards, and ran for another 78-yard score, finishing with 249 yards of total offense.
Zach Bruns tossed three touchdowns and ran for another, Jaret Johnson hauled in two scoring strikes and the Tigers scored 35 unanswered points after the game was tied at 14.
Bruns finished 4-7 for 143 yards passing, Arndt had 113 yards on 11 carries to go with 125 yards receiving on three catches.
The Tigers had 353 yards of total offense and are now 2-0, the Thunderhawks fall to 0-2.

Minnewaska Area 43, Atwater-Cosmos-Grove City 16
GROVE CITY – Ryan Amundson finished 6-7 passing for 121 yards, and ran for 134 yards and three touchdowns to lead Minnewaska past ACGC 43-16.
Grant Jensen caught four passes for 95 yards as the Lakers improve to 1-1. Josh Kinzler ran for 131 yards and a score for the Falcons who fall to 0-2.

Wheaton/Herman-Norcross 39, Clinton-Graceville-Beardsley 0
GRACEVILLE – Nelson Schmidt accounted for four touchdowns, and the Wheaton/Herman-Norcross defense forced five turnovers in a 39-0 rout over Clinton-Graceville-Beardsley on Friday afternoon in Graceville.
Schmidt threw for 72 yards and two touchdowns, ran for 129 and two more scores, including a 74-yarder late. Tate Serocki was on the receiving end of both touchdown passes, includinga 38-yard strike to open the scoring in the first quarter.
James Conroy added a 30-yard touchdown run to give the Warriors a 12-0 lead going into halftime.
The game got out of hand in the third quarter when the Warriors forced a turnover on three consecutive Wolverines drives, resulting in 13 more points, highlighted by Christian Krump’s 27-yard touchdown run.
Defensively Gunner Martinek had two interceptions, Isaac Deal recorded two sacks, and John Hasbargen led with eight tackles and a fumble recovery.
Sam Adelman was forced to play quarterback after Mason Zimmel left with an injury, Adelman threw for 62 yards but was picked off four times. He ran for 55 yards, Casey Dahl caught two passes for 54 yards, and Nate Moberg led CGB on defense with eight tackles and .5 a sack. The Warriors are now 2-0 while the Wolverines fall to 0-2.

Brandon-Evansville 54, Hillcrest Lutheran 15
EVANSVILLE – Brandon-Evansville had 46 points by halftime and racked up 445 yards of total offense in a 54-15 rout of Hillcrest Lutheran Academy on Friday night.
Marshall Riedel ran wild, going for 264 yards on just 11 carries, scoring four touchdowns, including runs of 97 yards and 75 yards. Keagan Schiele threw three touchdowns behind an offensive line that had their way throughout the game.
Riedel wasn’t done though, recording to interceptions on defense. Tanner Bitzan had eight tackles and the Chargers improve to 1-1. The Comets fall to 0-2.

Hancock 41, Rothsay 18
ROTHSAY – Hancock spoiled Rothsay’s home opener on Friday night with a 41-18 win.
The Tigers struck first when they took the opening kickoff back for an 85-yard  touchdown return, but the Owls responded with a three straight scoring drives, two of which ended with Preston Rohloff touchdown passes. The Owls continued to pour it on and took a 35-6 lead into halftime. Hancock finished with 303 yards rushing, 88 passing and improve to 2-0.