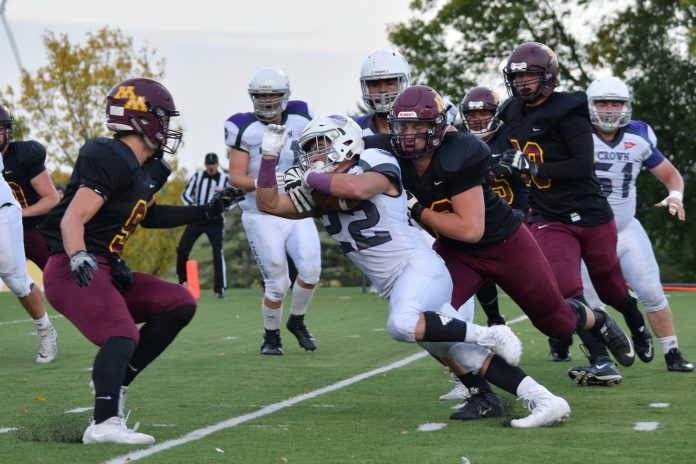 FOOTBALL
VALLEY CITY, N.D. – Valley City State jumped out to an early lead and did not look back in downing Minnesota Morris, 48-0, Saturday night in a non-conference football game in Valley City.
The Vikings scored touchdowns on their first five possessions in gaining a 34-0 first quarter lead on the Cougars. Jake Peterson caught two touchdown passes and Louis Quinones rushed for two.
The Cougar defense held VCSU to just two touchdowns over the remaining 45 minutes. Both of the Vikings’ touchdowns were Peterson grabs. He caught six balls for 150 yards and four touchdowns.
Defensively, Joseph Loija led the Cougars with 11 tackles. Nathan Gehlen made nine stops with two tackles for loss and one sack. Offensively, Nathan Sheridan caught four balls for 66 yards.
Minnesota Morris (0-2) opens up UMAC play next Saturday at MacMurray.

VOLLEYBALL
Colorado College 3, UMM 0 / Pacific Lutheran 3, UMM 2
COLORADO SPRINGS, Colo. – The Minnesota Morris volleyball team faced two teams ranked in the top 12 nationally Saturday to wrap up play at the Spike It Up Classic in Colorado Springs. The Cougars fell to No. 2 Colorado College in straight sets then took No. 12 Pacific Lutheran to the brink before falling in a 15-13 fifth set.
After losing a tight first set to Pacific Lutheran, 25-23, the Cougars took the next two sets by close scores of 27-25 and 26-24. In the second set, UMM trailed 20-15 before rattling off five of the next six points to pull within 21-20. Later, the Lutes led 25-24. A Whitney Schwartz kill tied it at 25. That was followed by an Alyssa Ukestad ace and a Brenna Tinjum kill that tied the match at one set a piece.
The third set was tied at 23 before another late Cougar rally gave them a 2 sets to 1 lead. Kills by Tinjum and Rachel Mathias were part of 4-1 stretch to close out the set.
The Lutes dominated the fourth to prolong the match and they led the final set 12-9 before the Cougars staged another late-set rally. Kills from Schwartz and Morgan Miller and a PLU error tied the set at 12. PLU scored three of the next four points though to win the set and the match.
Mathias led the Cougars with 13 kills. Layne Herrmann totaled 37 assists and Ukestad had 25 digs.
Minnesota Morris (3-6) returns to Minnesota for their home opener Tuesday against UW-Stout at 7 p.m. at the PE Center. 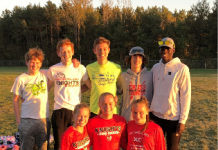