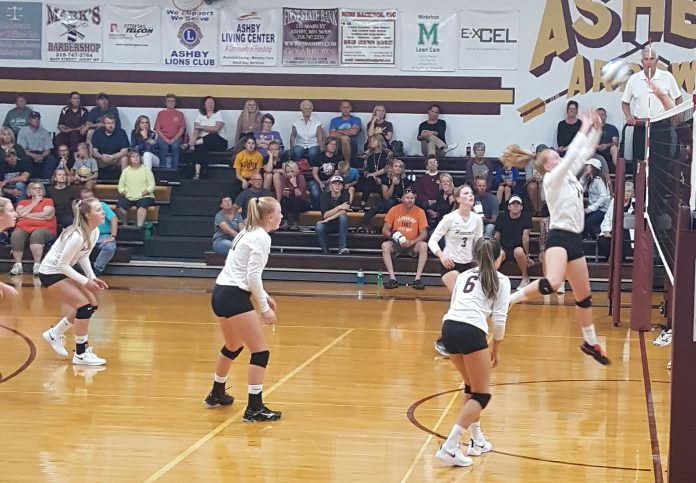 The Tigers girls placed second as a team behind only Sophia Kluver and Sauk Centre.
Kluver took first individually while the Tigers Maddie Carrington took third overall, Meredith Carrington was 38 seconds behind in fifth place. Other Tigers finishing in the top 30 were Crystal Nohl (22), Malory Anderson (24), and Kaylie Raths (27). Samantha Franzese of Border West took 29th place to lead the Bucs who finished ninth as a team.

VOLLEYBALL
Ashby 3, Hancock 1
ASHBY – Ashby earned their first win of the year with a four-set victory over Hancock in volleyball on Monday, 25-15, 25-13, 21-25, 25-21.
After jumping out to an 11-1 lead in the first set, the teams played even but the 10-point deficit was too much for the Owls to overcome. The Arrows again rolled in the second set before Hancock regrouped to take the third. The fourth set was a back-n-forth battle, but the Arrows were able to pull it out with a late rally.
Amelia Barry led the Arrows with 10 assists, five digs and three service aces, Courtney Koefod had 12 digs, Brynn Krupke recorded eight kills as they improve to 1-6.
Rylee Hansen filled the stat sheet for the Owls with four kills, six digs, three assists, two blocks and four aces. Carlee Hansen had eight kills, Morgan Kisgen tallied eight assists but Hancock falls to 0-2.