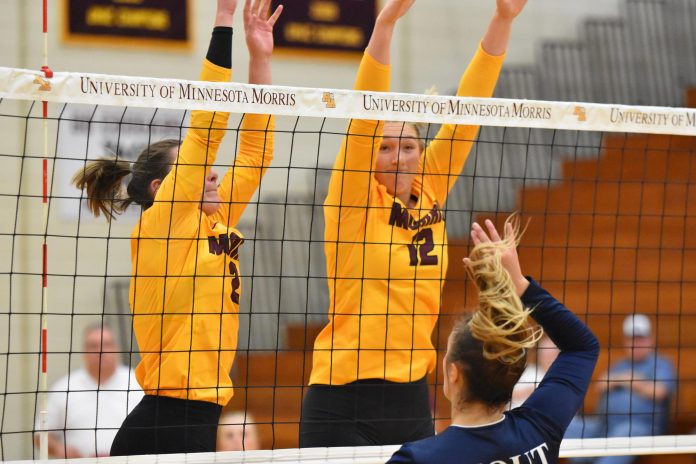 VOLLEYBALL
UMM 3, UW-Stout 2
MORRIS, Minn. – After starting the 2018 season with two out-of-state tournaments and another road contest in between, the Minnesota Morris volleyball team finally opened the home portion of their schedule Tuesday night and they treated the home fans with a thrilling five-set win (23-25, 25-23, 25-15, 22-25, 21-19) over UW-Stout in non-conference action.

The second set was tied at 22 before the Cougars scored three of the final four points to tie at match at one set a piece. A Whitney Schwartz kill gave UMM lead and that was followed by a smash from Brenna Tinjum. Another Schwartz kill closed out the set.

The Blue Devils won the fourth frame to set up an exciting deciding set. The set was comprised of 15 ties, five lead changes, and the Cougars staved off four UW-Stout match points. Trailing 15-14, a Rachel Mathias kill staved off the first match point to knot the set at 15. Mathias delivered two more kills on the next two match points to tie it at 17. Tori Everson saved the next match point with a kill to knot it at 18. A service error gave UMM a 20-19 lead. Morgan Miller and Brenna Tinjum combined on a block to close out the match.

Schwartz led UMM with 17 kills and Mathias added 15. Miller had an incredible 13 blocks. Layne Herrmann totaled 50 assists to go along with 17 kills. Everson and Alyssa Ukestad each had 18 digs.

Minnesota Morris (4-6) next hosts a UMAC Triangular with Northwestern and Northland Saturday beginning at 2 p.m. at the PE Center.