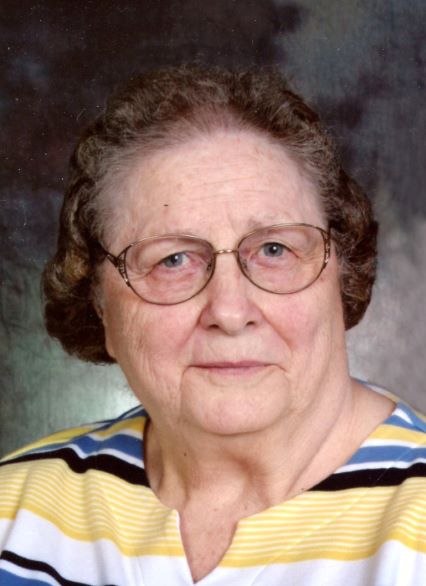 Barbara passed away peacefully surrounded by her family, on Sunday, September 16, 2018.  She was 85 years old.

Visitation will be on Tuesday from 5 to 7 p.m. at the Pedersen Funeral Home in Morris and for one hour prior to the service at the church on Wednesday.The funeral services for Barbara Schmidgall of Morris, Minnesota will be held on Wednesday, September 19, 2018 at 10:00 a.m. at the Apostolic Christian Church, rural Morris.  Apostolic Christian Church Ministers will be officiating.

Barbara’s prayers were answered when God called her Home in the early morning hours Sunday, September 16, 2018. Barbara’s unwavering faith and fulsome joy in serving the Lord was an inspiration for all, no more so than in the final weeks of her life.

Barbara was a loving wife, a beloved sister and aunt, and a wonderful friend, but most precious to her was being a mother, grandmother, and recently, a great-grandmother. Barbara was devoted to her family, always the organizer for gatherings small and large. She was a joyful, generous, and tireless hostess, entertaining family and friends for special events and everyday occasions. Barbara’s coffee pot was truly always on, and her warm and bright smile and persuasive admonition “oh, come on, sit for a minute” rarely went unheeded.

Barbara was well known for her cooking and baking, even parlaying her love of cooking into a part-time job for several years. Less well known is the blue ribbon she won when, unbeknownst to Barbara, a friend entered her chocolate chip cookies in the county fair. She was an avid reader, with a stack of books beside her chair always, and her name perpetually on the list at the library for the next new book.

Mary Barbara Kepner was born in Benson, Minnesota May 27, 1933 to George and Mary (Maher) Kepner. Barbara grew up in Swift County and attended country school. At her father’s urging, she went on to Hancock High School, boarding with a family in town. Barbara was valedictorian of her graduating class of 1951 and was awarded a college scholarship. Barbara chose to work in Bell’s Grocery in Hancock until her marriage to Gilbert Schmidgall, the local boy who captured her young heart. Barbara and Gilbert were married on April 14, 1953 and this past spring celebrated their 65th wedding anniversary.

Burial will be in the Apostolic Christian Church Cemetery, rural Morris.