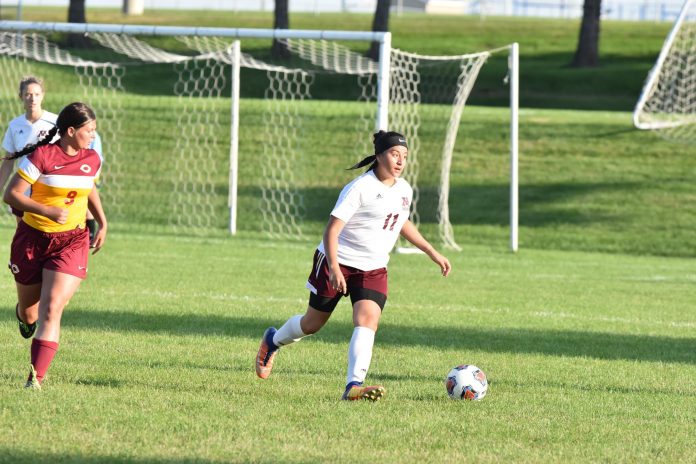 VOLLEYBALL
UMM 3, Martin Luther 1 / UMM 3, Bethany Lutheran 1
MANKATO, Minn. – The Minnesota Morris volleyball team embarked on a trip to Mankato Tuesday for their second UMAC triangular of the season and they are coming back to Morris with two victories as they topped Martin Luther and Bethany Lutheran, both in four sets.

After splitting the first two sets, the Cougars used a late rally to take the third set from the Knights. Trailing 22-18, the Cougars rattled off seven straight to claim the set and take a match lead.

UMM used the momentum from the third set to take an early edge in the fourth. Kills from Layne Herrmann and Jenna Howden closed out the match.

Brenna Tinjum led the Cougars in both kills with 17 and digs with 12. Herrmann had 48 assists and five aces.

Minnesota Morris (7-7, 3-1 in UMAC) heads to Superior for another UMAC triangular Saturday to face Crown and UW-Superior.

MEN’S SOCCER
UMM 2, Martin Luther 2 / OT
NEW ULM, Minn. – The Minnesota Morris men’s soccer team is used to playing longer than 90 minutes this season. For the fourth time in seven contests, and for the third consecutive game, the Cougars went extra time with Tuesday’s game ending in a 2-2 draw with Martin Luther in UMAC action in New Ulm.

Neither team scored in the game’s first 45 minutes, but both scored early on in the second half. Aaron Swanson gave MLC a lead in the 54th minute. Four minutes later, the Cougars tied the contest with Corbin McCall’s first goal of the season off a pass from Liam Easter.

The Knights regained the lead in the 65th minute. UMM peppered the Knights with five shots over the next 22 minutes until Gabe Arreguin’s first goal of 2018 slipped past the goalkeeper for the equalizing goal in the 88th minute.

In the second overtime, Chase Gray had a chance for the walk-off win with a header in the 108th minute, but the shot was saved by MLC.

Lucas Harmon saved seven shots in net for the Cougars.

Minnesota Morris (0-5-2, 0-1-1 in UMAC) returns home to start a four-game homestand Saturday against Northland at 2 p.m.

WOMEN’S SOCCER
UMM 2, Martin Luther 1
NEW ULM, Minn. – After a difficult start to the season, the Minnesota Morris women’s soccer went on the road Tuesday and picked up their first win of 2018 with a 2-1 victory over Martin Luther in UMAC action in New Ulm.

The game appeared to go scoreless going into halftime, but the Cougars managed a late goal to take a lead going into the break. Abby Fluke launched in a shot from outside of the box in the 43rd minute to give UMM the 1-0 advantage.

Martin Luther tied the game with a Rachel Bitter goal in the first minute of the second half. It stayed 1-1 over the next 30 minutes until Brooke Lorentz broke free for her second goal of the season in the 80th minute.

UMM goalkeeper Megan Tschida faced three shots in the final 10 minutes making one save with two others going wide. She made four saves throughout the 90 minutes.