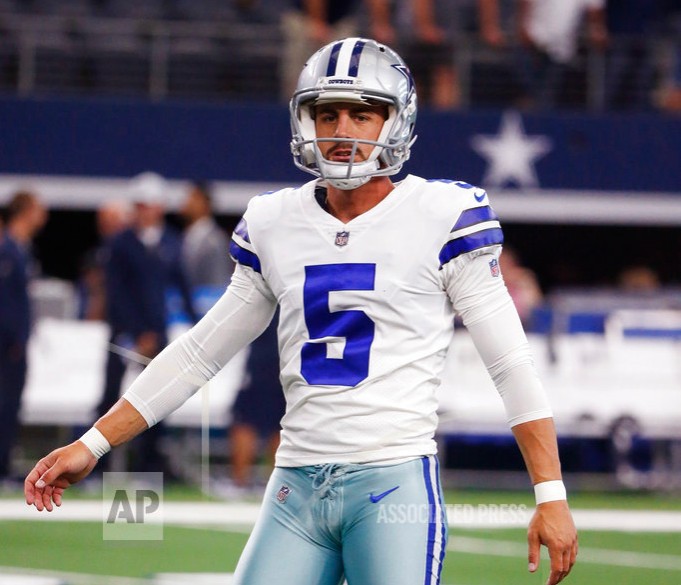 Bailey’s deal was done on Tuesday, after the Vikings waived Carlson fresh from his 0-for-3 game at Green Bay.

The fifth-round draft pick from Auburn missed field goals of 48, 49 and 35 yards, with the last two failed tries coming in overtime and forcing the Vikings to settle for a 29-29 tie with the rival Packers.

“It’s hard to figure out. You think you’ve got a guy for a while, and then he goes out and misses three in a big game,” coach Mike Zimmer said on Monday in discussing what he said was an “easy” decision to cut Carlson. “But things happen, I guess.”

The Vikings drafted Blair Walsh in the sixth round in 2012 and watched him become an All-Pro as a rookie, so general manager Rick Spielman sent two sixth-round picks to the New York Jets just to move up in the fifth round for Carlson in search of similar returns.

Four days after Carlson was formally awarded the job upon the release of incumbent and seventh-year veteran Kai Forbath, he missed two 42-yard field-goal tries in a preseason game. Zimmer was peeved enough that night to order a 2-point conversion try after a touchdown to send a message to Carlson about his lack of room for error on a team with sights set on the Super Bowl.

Carlson made a 48-yard attempt plus three extra points in the opener on Sept. 9 against San Francisco and he sent nine of 10 kickoffs over two games into the end zone for touchbacks, but leg strength can’t cover up inconsistency from shorter distances. Carlson acknowledged afterward a decreased self-confidence when he lined up for the 35-yarder on the last play of the game, a red flag for his ability to smooth out a rough start.

Bailey has made 186 of 211 field-goal attempts, an accuracy greater than 88 percent that trails only Baltimore’s Justin Tucker. The 30-year-old Bailey slumped last season after a groin injury that kept him out for four games, missing five of 13 field goals upon his return and producing the first two failed extra points of his NFL career to foreshadow his release by Dallas on Sept. 1. He has the track record, though, to give the Vikings faith they’ll get three points when they drive close enough to earn it.

To make room for Bailey, the Vikings waived second-year wide receiver Stacy Coley. He became expendable when wide receiver Aldrick Robinson was signed on Monday. Stefon Diggs and Adam Thielen have formed one of the league’s most potent wide receiver duos, but they could use more depth behind them.