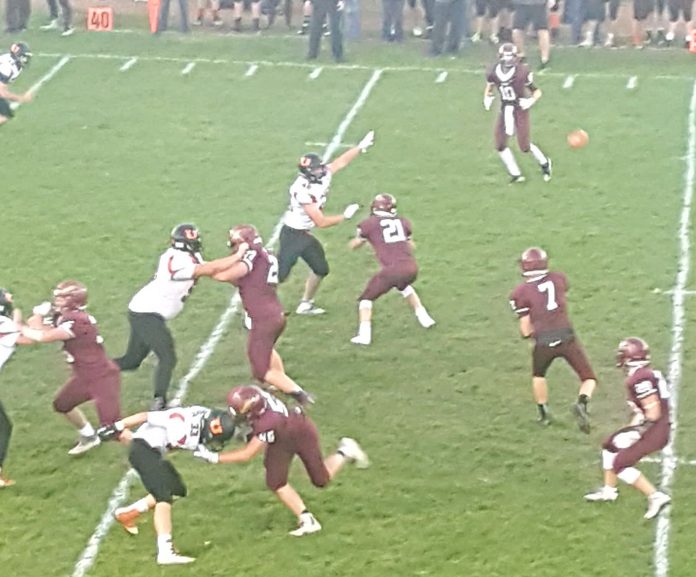 Morris Area/Chokio-Alberta 48, Benson 14
MORRIS – Morris Area/Chokio-Alberta’s offensive line dominated in their run blocking on Friday as the team racked up 553 yards rushing in a 48-14 rout of Benson from Big Cat Stadium.
Senior Camden Arndt ran for the bulk of those yards, going for 293 on 19 carries with two touchdowns, Zach Bruns ran for 145 on 12 carries and two scores and the Tigers defense pitched a second half shutout.
The Tigers had 590 yards of total offense, despite throwing the ball just five times.
Colten Scheldorf ran for two touchdowns, Bruns, Mace Yellow, and Braden Waldbeser each had an interception for the Tigers who outscored the Braves 20-0 in the second half, improving to 4-0 on the season.
Braves quarterback Will Enderson was 15-38 passing for 248 yards and a touchdown with two interceptions. Benson is now 0-4.

Underwood 28, Hancock 19
HANCOCK – Daxton Olson threw for two touchdowns and ran for another as Underwood defeated Hancock 28-19, spoiling the Owls homecoming night.
Olson was 7-14 for 137 yards with both touchdowns going to Levi Blaskowski. Blaskowski finished with four catches for 79 yards, Zane Swanson carried 29 times for 101 yards as the Rockets improve to 3-1.
Preston Rohloff was 16-30 for the Owls, finishing with 344 yards passing, three touchdowns and two interceptions. Tyler Timmerman impacted the game on both sides of the ball, hauling in six catches for 187 yards, including a 75-yard touchdown catch, ran for 30, and tallied 12 tackles defensively with a pass breakup.
Brandon Kellenberger added seven catches for 87 yards and a score, Harrison Zeltwanger had six tackles and a sack as Hancock falls to 3-1.

BOLD 54, Minnewaska Area 8
OLIVIA – Jordan Sagedahl threw three touchdowns and the BOLD Warriors routed Minnewaska 54-8.
Sagedahl finished 5-9 for 97 yards while running for 70. The Warriors ran for 223 yards as a team and the defense held the Lakers to 193 yards of total offense, forcing seven turnovers.
Darion Alexander led the Lakers with 68 yards rushing, Tyson Meyer ran for a touchdown as they fall to 2-2. The Warriors are now 4-0.

Wheaton/Herman-Norcross 22, Rothsay 8
ROTHSAY – Hunter Johnson hauled in two second quarter touchdown receptions to help lift Wheaton/Herman-Norcross past Rothsay 22-8.
Johnson finished with six catches for 126 yards, Christian Krump ran for 100 yards and sealed the win with a two-yard touchdown in the fourth, helping the Warriors remain unbeaten at 4-0.
Nelson Schmidt went 7-10 for 144 yards, two scores and an interception, Derrick Hanson led the Warriors on defense with 11 tackles.
Colby Larson had 138 yards rushing for the Tigers, Jacob Christ ran for 115 as they fall to 2-2.

Brandon-Evansville 44, Bertha-Hewitt 14
BRANDON – Keagan Schiele tossed four touchdowns, Marshall Riedel returned a punt 93 yards to the house and Brandon-Evansville defeated Bertha-Hewitt 44-14.
Schiele was 8-13 for 122 yards, Riedel ran for 88 yards on 11 carries, had 50 yards receiving and a touchdown, Tanner Bitzan accounted for 87 yards, three touchdowns, and eight tackles on defense as the Chargers improve to 2-2.