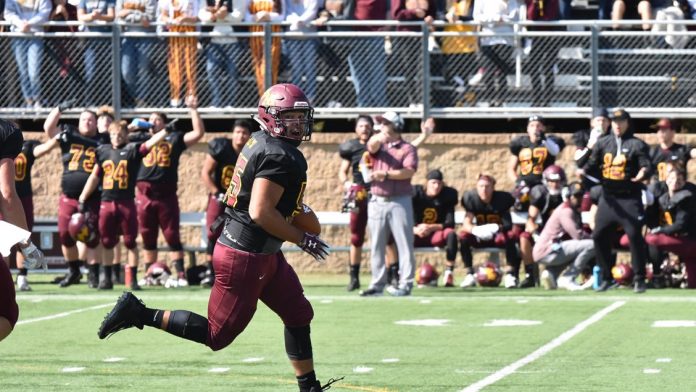 FOOTBALL
MORRIS – Justin Masloski hit Branden Carlson for a 12-yard touchdown with 4:58 remaining, and the UMM Cougars defeated Iowa Wesleyan 13-7 on homecoming for their first win of the year.

In front of a raucous packed house at Big Cat Stadium, the Cougar defense forced a three-and-out before the Cougars hit paydirt on their first offensive play from scrimmage when Masloski connected with Caleb Kemp for a 48-yard touchdown.

Masloski threw with precision and finished the day 17-32 for 227 yards and two scores, the bulk of his passes going to Nate Sheridan who hauled in eight catches for 88 yards.

Carter Wattenhofer led the charge recording three sacks, with each one coming at crucial moments to ignite the crowd, and in the process demoralize the Tiger offense. Fellow defensive line mates Nathan Gehlen and Damien Lange combined for two sacks, two tackles-for-loss.

The constant pressure from the defensive line helped the secondary keep the Tiger passing attack from creating any big plays, and kept Collins in a state of constant chaos, and the Tigers offense reeling.

The Tigers eventually put together a solid drive that ended in a one-yard touchdown from Stafford Lewis to take a 7-6 lead in the fourth, only to have the UMM offense respond with their best drive of the year.

Masloski lofted a picture-perfect sideline pass to Kemp for a 20-yard reception to open the drive.

Kemp later added his biggest run of the season, a 30-yard carry that took the Cougars from the Tigers 42 yard line down to the 12, setting up Masloski’s scoring strike to Carlson for the game-winning score, and UMM earned a statement win on their home turf.

The Cougars are next in action on Saturday, Oct. 6th, for a 1:00 kickoff against Crown College from Big Cat Stadium.

WOMEN’S SOCCER
MORRIS, Minn. – Minnesota Morris took a lead into halftime, but Northland surged ahead in the second half and took a 3-1 victory from the Cougars in UMAC women’s soccer action Saturday at the Cougar Soccer Field.

Brooke Lorentz gave the Cougars an early edge as she perfectly placed a shot from 40-feet out in the upper left corner of the net to give UMM a 1-0 lead in the ninth minute. Cougar goalkeeper Bailey Tschida kept Northland off the scoreboard in the first half making a pair of saves.

Northland though tied the game in the first minute of the second half and kept the pressure on throughout the remainder of the contest. Kaiya Voldberg gave the Lumberjills the lead in the 65th minute on a striker in the right corner of the net. She then iced the game in the 74th minute with a goal off a brilliant move outside of the box.

Tschida made six saves for the Cougars on the afternoon. Minnesota Morris (1-6, 1-2 in UMAC) remains at home to face Crown Wednesday at 2 p.m.

MEN’S SOCCER
MORRIS, Minn. – The Minnesota Morris men’s soccer team closed out Homecoming weekend by hosting UW-Platteville Sunday for a non-conference contest. The Pioneers would head back to Wisconsin with a 3-0 victory.

Brad Strobel started the scoring for the Pioneers with a goal in the 17th minute off a loose ball in front of the net for the lone goal of the first half.

UWP put more pressure on the Cougars in the second half. Teon Fountain scored in the 58th minute and Nick Konopacki added a tally int he 72nd minute.

Jake Peterson made 10 saves in net for the Cougars. Minnesota Morris (1-6-2) returns to UMAC play Wednesday they host Crown at 4:30 p.m.

MORRIS, Minn. – Minnesota Morris collected their first win of the season in a dominating 3-0 win over Northland Saturday in UMAC men’s soccer action at the Cougar Soccer Field.

The Cougars outshot the Lumberjacks 40-2 over the 90-minute contest and held a 13-2 advantage in shots on goal. Lucas Harmon made saves on both shots he faced in earning his first collegiate win in net for the Cougars.

Aaron Wackerfuss gave UMM a 1-0 lead with a goal in the 19th minute. Chase Gray and Jake Alessio fed the freshman with some passing in front.

The Cougars added to their lead in the second half. With the help of more great passing, Gray and Corbin McCall assisted on a Denis Ostroushko goal in the 57th minute. Hugo Castaneda closed out the scoring in the 70th minute with a penalty kick in the right side of the net.

CROSS COUNTRY
NORTHFIELD, Minn. – The Minnesota Morris men’s and women’s cross country teams got back on the course Saturday for the St. Olaf Invite in Northfield. The men finished in sixth place while the women placed ninth.

The Cougars next compete Friday at the Bethany Lutheran Invite in Mankato.

VOLLEYBALL
SUPERIOR, Wis. – The Minnesota Morris volleyball team traveled to Superior Saturday for their second UMAC Triangular of the week. The Cougars topped Crown in straight sets in the opener, but fell in five to UW-Superior in the nightcap.

Against the Storm, the first set was tied at 15 before the Cougars began pulling away. A Whitney Schwartz kill and a Mia Frick ace gave UMM an 18-15 lead. The Cougars would take six of the final seven points. A Tori Everson kill and a Layne Herrmann ace closed out a 25-18 win.

After an easy 25-14 win in the second set, the Cougars engaged the Storm in a tight third set before recording a 25-21 win. Kills from Schwartz, Hailey Remme, and Everson helped give UMM a 16-12 lead. Another Schwartz kill and a Crown error put an end to the match.

Everson and Frick led the Cougars with eight kills each. Herrmann had 17 assists. Everson and Allison Yang led with 10 digs.

Minnesota Morris (8-8, 4-2 in UMAC) heads out of conference for a match Tuesday at Saint Benedict.