MINNEAPOLIS (AP) — Jose Berrios became the first Minnesota pitcher in eight years to reach 200 strikeouts, throwing seven smooth innings in a 2-1 victory over the Chicago White Sox in the first game of a doubleheader before the Twins completed the sweep with a 12-4 victory on Friday night behind a career-high six RBIs from Mitch Garver.

Berrios finished his All-Star season with a career-best 3.84 ERA and 202 strikeouts. The last time a Twins pitcher topped that milestone was Francisco Liriano (201) in 2010, with Johan Santana (235) in 2007 the most recent prior to that.

“It means a lot, obviously. That was one of my goals before the season started,” Berrios said. “That’s when I wrote it down, and I accomplished it and I’m thankful to God for that.”

Berrios (12-11) struck out nine batters, allowing just three hits and one run on Leury Garcia’s RBI single in the third. Berrios walked four, including Avisail Garcia to lead off the sixth, but he followed that by fanning Daniel Palka, Matt Davidson and Omar Narvarez in a 10-pitch span to finish the inning with his fastball buzzing.

Though Berrios had a 4.15 ERA and just a 3-4 record in 12 starts after the All-Star break, the right-hander took another step toward being the ace at the top of the rotation the Twins have lacked since Santana was traded 11 years ago.

“I want to be one of the best pitchers in the league,” Berrios said. “I think I have the material to do that and to be the best pitcher on this team, so that Minnesota can construct around me and build a winning team.”

Reynaldo Lopez (7-10) turned in another strong start in the opener for the White Sox, save for matching his season high with five walks. The righty struck out five in six innings with four hits and two runs allowed. Tyler Austin’s RBI groundout in the first and Willians Astudillo’s sacrifice fly in the sixth were all the Twins needed.

After four outs by Taylor Rogers, Trevor May struck out the last to batters to notch his second save and end the game that was a makeup from the mid-April weekend when the White Sox and Twins had three straight games postponed by a snowstorm.

Joe Mauer, playing possibly the final games of his career with an expiring contract and a pending decision about whether or not to retire at age 35, went 2 for 4 in each game and is batting .362 (21 for 58) over his last 14 starts while reaching base at least once in each.

Garver went 4 for 5 with doubles to fuel Twins starter Chase DeJong (1-1) in his first victory with six strong innings, despite solo home runs by Jose Rondon and Kevan Smith. Robbie Grossman went 2 for 4 with three RBIs for the Twins.

The White Sox struck out 18 times during the doubleheader, raising their season total to an MLB-most 1,570. That’s also only one less than the all-time record set last year by the Milwaukee Brewers. Yoan Moncada has the team lead with 215, followed by Davidson with 162.

“I’m leaving this season in a much better way than how I entered the season,” Lopez said through a team interpreter. “I learned a lot.”

The last time the White Sox played in Minnesota, on Aug. 20, Renteria experienced light-headedness in the afternoon and was hospitalized overnight as a precaution. He wound up missing four games. As a thank-you to the staff at Hennepin County Medical Center for his care, Renteria sent popcorn and donated 200 tickets to children being treated at the facility.

White Sox: LF Nicky Delmonico, who hurt his shoulder on Tuesday, was a late addition to the second-game lineup in place of Adam Engel.

Twins: Garver made his first start in 17 games in the nightcap, after recovering from concussion symptoms. 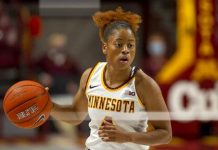