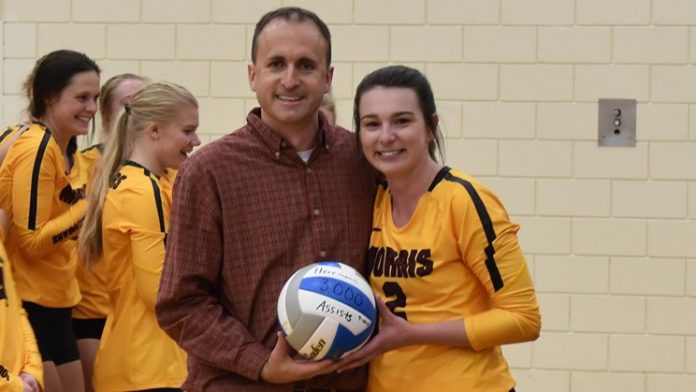 VOLLEYBALL
MORRIS, Minn. – Only two players in the history of the Minnesota Morris volleyball program have surpassed 3,000 career assists: Beth Ploof who recorded 3,364 assists from 1990-93 and now junior Layne Herrmann who reached the 3,000-assist milestone in the Cougars sweep of Bethany Lutheran (25-18, 27-25, 25-16) Saturday in UMAC action at the PE Center.

Herrmann needed 31 to reach the 3,000-assist plateau and she collected 32 on Saturday to now stand at 3,001 career assists.

The first set was tight until a late Cougar 5-0 run gave them a healthy edge. A kill from Tori Everson and a Rachel Mathias service ace put UMM up 23-16. Whitney Schwartz later closed out the set with a kill.

The second set needed extra points to obtain a 2 sets to none lead. The Cougars led 22-18, but Bethany fought back to tie it at 24. Another key Schwartz kill gave UMM a 26-25 lead then an Everson smash gave the Cougars the 27-25 set win.

The third set was tied at 14 before the Cougars took control down the stretch. Brenna Tinjum drilled three kills in a Cougar 5-0 spurt. Back-to-back kills from Everson closed out another 5-0 run and the set and match in favor of the Cougars.

MEN’S SOCCER
MORRIS, Minn. – For the second time in three Saturdays, Minnesota Morris and North Central played extra in UMAC men’s soccer action. While the Rams won the overtime battle two weeks ago in Minneapolis, Saturday’s game at the Cougar Soccer Field ended in a 1-1 draw.

The Cougars got on the scoreboard in the first half. Gabe Arreguin fed Tristan Balk on a nice crossing pass that he fired into the net for a 1-0 Cougar led in the 29th minute.

North Central would tie the contest on a loose scramble in front of the Cougar net that Rodrigo De Mendoza connected on in the 68th minute.

Lucas Harmon made seven saves in for UMM while Gabe Hartwig made nine stops for North Central.

Providing the offensive punch for UMM was sophomore Sam Tate as she scored two goals and assisted on two others. Tate got the scoring off to an early start. Her free kick from just outside of the box in the third minute was laced into the right side of the net for an early 1-0 UMM edge.

After North Central tied it in the 11th minute, Tate would help regain the edge the Cougars. Her pass in front led Brooke Lorentz perfectly who connected for a 2-1 UMM lead in the 21st minute. Tate would collect her second goal in the waning minutes of the half as her shot snuck just inside of the right post for a 3-1 UMM edge in the 44th minute.

Lorentz extended the Cougar lead with her second goal of the afternoon in the 60th minute. Tate was involved in the final goal of the day as she assisted on a Rylee Whiteside connection in the 75th minute.

Megan Tschida made five saves in net for the Cougars.