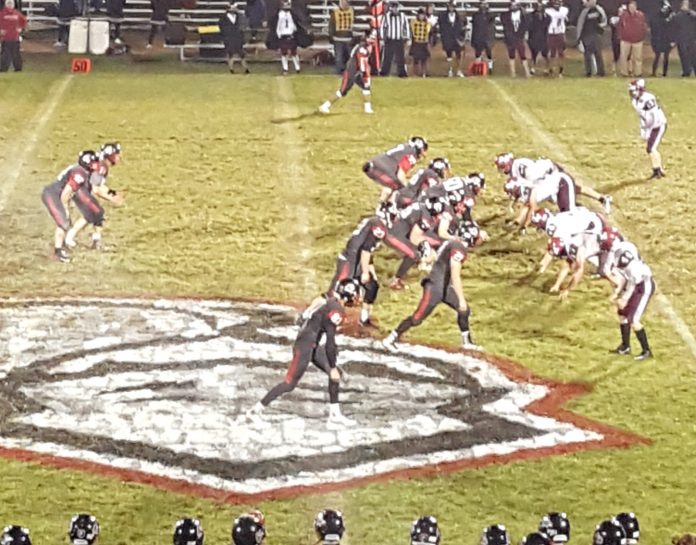 Luke Imdieke and Tristan Stoetzel each ran for over 100 yards for the Silverstreaks who never attempted a pass.

Stoetzel scored on a nine-yard run in the first quarter, with Imdieke adding a 29-yard score in the second. The Tigers finally got on the scoreboard when Camden Arndt hit paydirt on a 25-yard run late in the fourth, but it wasn’t enough for the Tigers who fall to 4-2.

Arndt finished with 61 yards on 13 carries, Jaret Johnson was 2-7 passing for 39 yards. The Tigers were held to 162 yards of total offense, while the defense gave up 293 yards rushing to Osakis who is now 5-1.

The Lakers scored 22 points in the third quarter and took a 44-0 lead into the fourth.
Tyson Meyer ran for 81 yards and three touchdowns, Jack Blevins added 85 yards and two scores for the Lakers who are 4-2.

The Mainstreeters turned the ball over three times and fall to 1-5.

The Knight took their opening drive 65 yards for a touchdown, with Isaiah Sykora hitting Gage Staples for a 16-yard scoring strike. Both defenses took over from their forcing numerous three-and-outs.

The Knights held the Cardinals to just 122 yards of offense, including bottling up running back Cade Schmidt to just five yards on 11 carries. Gavin Paulson led the charge with nine tackles, four for loss. The Knights sealed the win with a two-yard touchdown run by Sykora, and improve to 3-3. The Cardinals fall to 1-5.

After the Tigers marched the opening kickoff down the field for a touchdown, the Wolverines fumbled on their first offensive series. After forcing a punt CGB was able to convert a fourth down into a touchdown, and the teams went into halftime tied at six.

Another fourth down touchdown conversion in the second half gave the Wolverines their first lead, adding on two more scores before Rothsay added a late touchdown.

Both teams are now 2-4 on the season.

The Rockets scored twice in the second quarter to take a 12-0 lead, the Chargers cut the deficit to four just before halftime on a six-yard touchdown run by Marshall Riedel.

Keagan Schiele’s three-yard touchdown run with 11 minutes left gave the Chargers a 14-12 lead, but they couldn’t hold it as they fall to 2-4 on the season. The Rockets are 5-1.

The Warriors raced out to a 24-0 first quarter lead, highlighted by a 66-yard touchdown run by Christian Krump, and a 45-yard scoring run by Alex Johansen.

Johannsen added a 46-yard touchdown run in the second quarter, Nelson Schmidt threw for two and ran for two more as the Warriors racked up 514 yards of total offense.