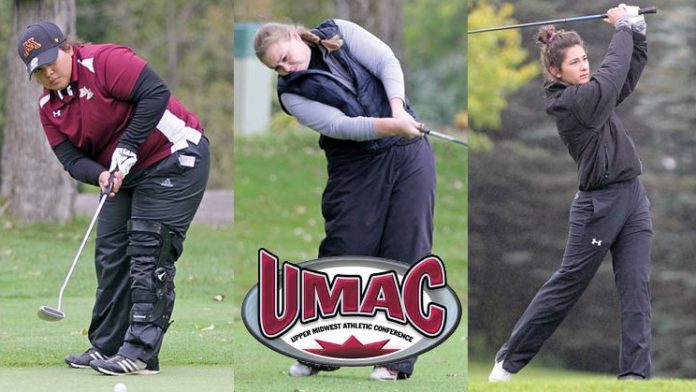 Sierra proved immediately she was up to the task of competing at the collegiate level. She placed in the top 10 in five of the seven events she played in during the fall and that included two medalist honors in the MLC/UMM Dual and the Cougar Invitational. Her season-low round was 83, which she obtained at the MLC/UMM Dual. She led the Cougars with a 93.7 scoring average, which placed her eighth among all conference golfers. She placed 12th at the UMAC Championships after carding scores of 94, 98, and 98 (290).

Earning her first all-conference nod is Foley. The senior was the Cougars’ top golfer at the UMAC Championships with a three-day total of 289 (101, 89, 99). She was second on the Cougars in scoring average with a 95.6, which put her 11th among all UMAC golfers. She posted a season-low score of 88 at the MLC/UMM Dual.

Quinn also had an impressive first collegiate campaign. Quinn was third on the squad with a 103.1 scoring average. She placed twice in the top 10 in six of the events she played in during the fall. Her season-low score of 97 gave her a seventh place position at the UNW Invite. She tied for 13th at the UMAC Championships with a three-day total of 301 (104, 98, 99).

Collins led the Cougars with an 80.9 scoring average this fall. That per round score ranked him 15th among all conference golfers. He finished just outside of the top ten at the UMAC Championships finishing in 11th place after rounds of 79, 80, and 81 adding to a total of 240. The first year golfer had three top ten finishes on the season which included a season-low round of 76, good for second place, at the MLC/UMM Dual.

Och wrapped up his collegiate career with a UMAC Honorable Mention selection. He also received an all-conference selection after placing third at the 2016 UMAC Championships. Och finished right behind Collins in scoring average this season with an 81.3. His season-low round of the fall was a 74 at the Viking Invite. The senior placed 19th at the UMAC Championships with a three-round score of 248 (83, 82, 83).

FOOTBALL
ST. PAUL – Freshman Carter Geyer performed well in the return game and the passing game in Saturday’s football win over Crown and for his efforts, he was named Upper Midwest Athletic Conference (UMAC) Special Teams Player of the Week.

Geyer put the Cougars in excellent field position after quality kickoff returns. He averaged 24 yards on five kickoffs with a long of 34 yards. In four of his five returns, the Cougars starting field position as at least their own 40-yard line. In a game that was not decided until the final minute, the field position battle was vital.

Geyer had his say on the offensive side of the ball as well. He caught the game-winning four-yard touchdown pass from Justin Masloski with 27 seconds remaining that gave the Cougars the win.