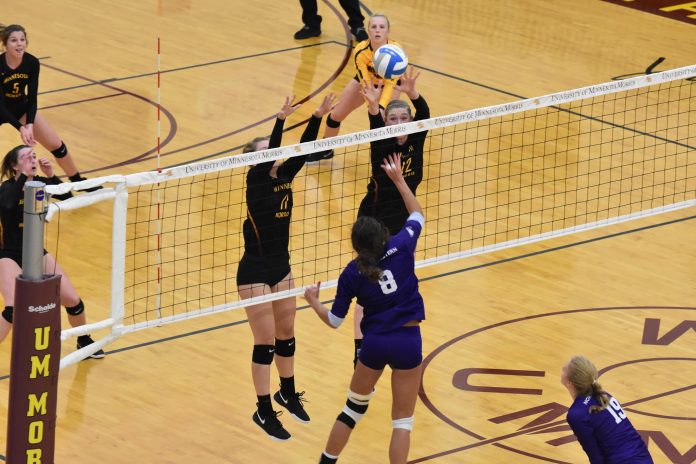 Minnesota Morris was the last team to defeat Northwestern in a UMAC regular season match; that was in 2013, 66 conference matches ago. They appeared to be on the verge of stopping UNW’s streak by taking the first two sets. The Cougars stormed out of the gates scoring the first six points of the match. The Eagles fought back to within one at 9-8 and would later take a 19-18 lead. Later tied at 19, the teams would exchange the next eight points before the Cougars closed out the set with a Morgan Miller kill and an Eagle error.

The Cougars went extra in the second set to extend their match lead. UMM trailed 17-9 before staging a comeback. They went on a five-point spurt to pull within 17-14. They fought back to tie it at 20 following back-to-back kills from Tori Everson. UMM staved off three set points before claiming the set on a Layne Herrmann kill.

WOMEN’S SOCCER
MORRIS, Minn. – Minnesota Morris took a lead into halftime and did not relinquish it in the second half as they took a 2-1 win from Northwestern Wednesday in UMAC women’s soccer action at the Cougar Soccer Field.

Three different variations of weather hit the two teams Wednesday afternoon. The game started with a sideways mist, then turned into a steady rain before heavy snowflakes fell at the end. Throughout it all, the Cougars gained a much needed win.

The Cougars took a 2-0 lead on nice passing from a trio of helpers. Megan Ellingboe fed Sam Tate along the right side who made a nice move around an Eagle defender and then Fed Yu Ito in the box who delivered it into the right side of the end for the first goal in the 32nd minute.

In the 53rd minute, Tate was on the receiving end of passes from Ellingboe and Ito and she lofted a shot into the left corner of the net for the two-goal Cougar advantage.

Northwestern pulled into within 1 with a goal in the 61st minute, but they would not get any closer as UMM goalkeeper Bailey Tschida kept the Eagles at bay to preserve the win. Tschida made eight saves in the contest.

Minnesota Morris (5-7, 5-3 in UMAC) next plays Saturday at St. Scholastica.

It seemed like it was going to be a scoring fest early on. Both teams notched goals in the game’s first six minutes. Northwestern’s Tyler McGeough drilled a shot in the lower right corner of the net to give the Eagles a 1-0 lead in the sixth minute. A mere 18 seconds later, Denis Ostroushko went on a breakaway down the left side and connected with a shot to tie at the game at 1.

After that both goalies held firm for the next 90 minutes. UNW’s Austin Gunkel made five saves while UMM’s Lucas Harmon made eight stops. It was an evenly played game, fitting of a game that went to overtime. Northwestern held a slight edge in total shots (18-16) with a 9-7 edge in shots on goal.

With time running out in the first overtime session, Ostroushko fed Alessio from just inside the box and drilled the golden goal in the 98th minute. The Cougars are now unbeaten in their last seven UMAC contests.