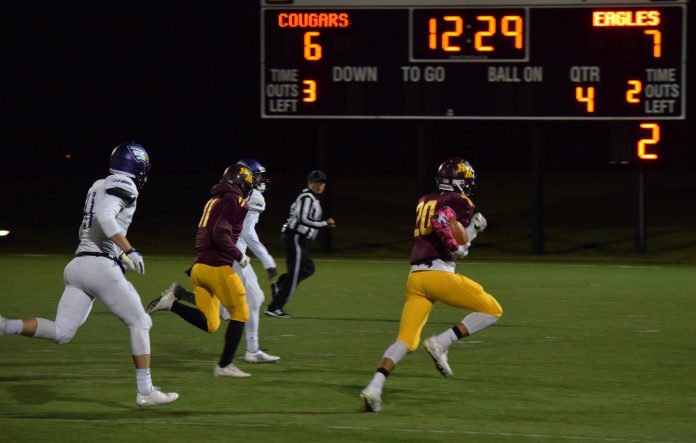 The Cougars took the opening possession of the game and drove 52 yards in 12 plays to get points on the scoreboard courtesy of an Austin Vanderkooi 30-yard field goal. Branden Carlson was the Cougar catalyst on the drive as he caught three passes for gains of 11, nine, and eight yards and had a rush for seven yards.

Later in the quarter Justin Masloski executed a perfect pooch punt that pinned the Eagles at their own 1-yard line. However, UNW’s Payton Bowdry took a quick hand off on the first play of the drive, found a hole and scampered 99 yards down the left side line to give the Eagles a 7-3 lead.

Two possessions later, Preston Fifarek intercepted a KJ Downey pass at the UNW 27 putting the Cougars in great field position. Masloski passes of 13 yards to Nathan Sheridan and nine yards to Carter Geyer down to the 5 ended the quarter. Northwestern held strong to start the second quarter and forced a 24-yard field goal attempt from Vanderkooi which he made to pull UMM within one at 7-6.

Later in the quarter, the Cougars were pinned themselves at their own 1-yard line. Like the Eagles before, the Cougars were able to drive down and score points right before the half. Carlson was again huge for the Cougars as he ran the ball for 16 yards and caught a pass for 16 yards down to the UNW 13 to set up a Vanderkooi 30-yard field goal at the gun to give UMM a 9-7 lead at the break.

Northwestern scored touchdowns on their first two possessions of the second half to take a 20-9 lead into the fourth quarter.

The Cougars would not go away though. They forced three Northwestern fumbles in the final stanza with the first fumble recovery leading to a touchdown. Marcos Luna recovered a fumble at the UNW 18. Two plays later, Masloski connected with Geyer on an 18-yard score. Masloski then hit Sheridan for the two-point conversion to cut the deficit to 20-17 with 12:37 remaining.

UMM would get the ball back two plays later. Brett Jansen recovered a fumble at the UNW 19. The Eagle defense forced a field goal attempt that was blocked.

The Cougars would get another chance on the first play of the next UNW drive. Drew Shipley forced a fumble that Nathan Gehlen recovered at the UNW 17. However like the last drive, the Eagles forced another field goal attempt that was again, blocked, preserving the Eagle lead.

Northwestern forced two Couigar punts on their remaining drives and ran out the clock to gain the three-point win.

Luna recovered two fumbles, made eight tackles, and recorded one sack for the Cougars. Brady Jergenson led with 10 tackles.

Minnesota Morris (2-4, 2-3 in UMAC) is on the road next week for a UMAC contest at Westminster.

The Cougars and Saints had the same number of shots on goal, but St. Scholastica was able to score on three of their five attempts. Armin Bobaric scored the Saints’ first two goals in the 37th and 59th minutes. Malcolm Lumsden added an insurance goal in the 87th minute.

John Hoff and Corbin McCall each had two shots on goal for the Cougars.

St. Scholastica tallied their first half goals in the 13th, 20th, and 28th minutes to gain the three-goal halftime lead. Morgan Friday scored two of her three goals in the opening 45 minutes.

Brooke Lorentz had two shots on goal for the Cougars. Bailey Tschida made four saves in net. Minnesota Morris (5-8, 5-4 in UMAC) next hosts Martin Luther Tuesday at 3:30 p.m. at the Cougar Soccer Field.

VOLLEYBALL
DULUTH, Minn. – After earning a win Friday night at Northland, the Minnesota Morris volleyball team stayed along the shores of Lake Superior for a triangular Saturday with St. Scholastica and St. Olaf in Duluth. The Cougars notched a conference sweep of the Saints before falling to the Oles.

Against St. Scholastica, the Cougars never trailed in the opening set in a 25-21 win. The stanza was tied at 14 before the Cougars won four of the next five points to gain the momentum. Kills from Whitney Schwartz and Rachel Mathias closed out the set.

The second set was tight until the Cougars rattled off nine straight points to gain a late double-digit lead. Mia Frick and Morgan Miller ended a 25-15 set win with kills.

UMM jumped out to an 18-9 lead in the third set. The Saints scored eight straight to make it interesting though at 18-17. The score would be tied at 22 before the Cougars scored three straight to close out the set and the match. Jenna Howden teamed with Mathias on a block then Howden closed things out with a kill.

Minnesota Morris (16-10, 11-3 in UMAC) goes out of conference for a match Monday at Concordia-Moorhead.

Ryan Anderson outdistanced the field Saturday winning medalist honors with a time of 27:53.47. His time was nearly a minute better than teammate Raymond Abraham who had a second place clocking of 28:52.68. Benjamin Barnack had a nice showing for the Cougars with a top ten time of 29:14.05, good for seventh place. Placing in the top 15 were Gabriel Davila (12th) and Edmund Cease (13th) who clocked times of 30:03.04 and 30:11.02.

The Cougars have three of the top four places in amassing 33 points. Martin Luther was second with 48 while Bethany Lutheran (68) and Crown (78) rounded out the field.

Easily topping the field was Cougar senior Katherine Novak who finished nearly a minute and a half ahead of the next closest runner with a time of 24:27.65. Alexa Yeager had a third place running of 26:48.65. Paige Stearns was right behind in fourth place with a clocking of 26:51.01. Kaitlyn Ladwig had a top ten time of 27:19.49, good for eighth place. Montana Lawrence rounded out the Cougar top five with a time of 29:01.39, good for 17th place.

The UMAC Cross Country Championships are next up for Minnesota Morris, Saturday, October 27 at Benson Golf Club.