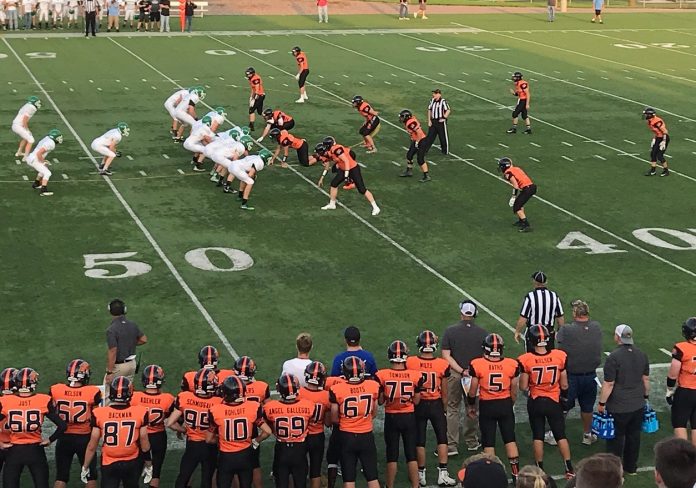 Arndt and Jaret Johnson each caught a touchdown pass and the Tigers offense put up 401 yards of total offense, improving to 5-2 on the season.

Irvin Brenes ran for 117 yards and two touchdowns as the Mainstreeters fall to 1-6.

Minnewaska Area 21, Osakis 0
OSAKIS – Minnewaska’s defense was dominant in a 21-0 win over Osakis.

The Lakers held the potent Silverstreaks rushing attack to 113 yards, holding Osakis to just one trip inside the red zone which ended with a turnover. John Helander had five tackles with a sack, Dylan Jergenson added six.

Jack Blevins scored on a 15-yard touchdown run late in the first quarter, adding another midway through the second when Ryan Amundson hit Grant Jensen on a 41-yard touchdown pass.

On the ensuing drive, Amundson jumped a route and returned an interception 24-yards for a score, his first of two interceptions.

The Warriors raced out to a 19-0 lead and took a 31-6 lead into halftime, highlighted by a 68-yard touchdown reception by Hunter Johnson from Nelson Schmidt.

Johnson had three catches for 82 yards, and ran for a two-yard score as well. Schmidt was 5-9 for 122 yards, two touchdown and ran for 100 yards and a score.

Marshall Riedel ran for 167 yards and four touchdowns, including two from 45 and 47 yards out. Keagan Schiele ran for 141 yards and a touchdown as the Chargers put up over 400 yards of offense.

The defense meanwhile held the Falcons in check all night, getting seven tackles from Mike Cochran and 6.5 from Tanner Bitzan.