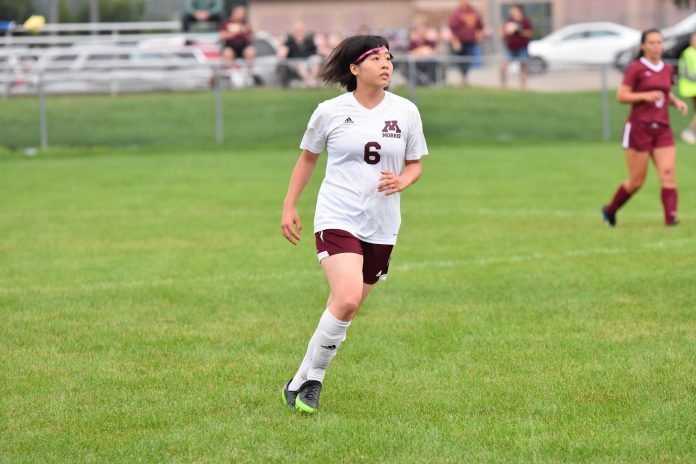 The Cougars controlled the game on the offensive end in the first half. They outshot the Knights, 12-4, with five shots on goal, but none reached the back of the net and the two teams went into halftime scoreless.

With an offensive rush, Ito laced a left-footed shot into the lower left corner for her team-tying sixth goal of the season and third tally in her last four contests.

Bailey Tschida stood her ground stopping all five shots she faced to earn the shutout.

MEN’S SOCCER
MORRIS, Minn. – Martin Luther made good use of their scoring chances as they defeated Minnesota Morris, 3-0, Tuesday in UMAC men’s soccer action at the Cougar Soccer Field.

Shots were almost even on the afternoon with Martin Luther holding a slight 11-10 edge, but they held a 7-4 advantage in shots on goal and three of their shots went into the net.

MLC’s Hugo Ugalde-Bemer accounted for all three Knight goals. His tally in the 31st minute got the scoring started. He assisted on Joshua Thiesfeldt’s goal right before the half. He would add another goal in the 72nd minute.

Lucas Harmon made four saves in net for the Cougars. Minnesota Morris (5-9-3, 5-3-2 in UMAC) travels to Ashland, Wis. to face Northland Saturday.

VOLLEYBALL
MORRIS, Minn. – The daunting five matches in five days in four different cities stretch came to an end Tuesday night for the Minnesota Morris volleyball team. They did not seem weary at all as they defeated Martin Luther in straight sets (25-11, 25-16, 25-12) in UMAC volleyball action at the PE Center.

The Cougars opened the match strong jumping out to a 10-3 lead. Alyssa Ukestad delivered two service aces as part of an 8-0 run. UMM later added a 7-0 run in the easy first set win.

Martin Luther battled to a 12-12 tie to start the second set before the Cougars took over. Ukestad added another ace and kills from Mia Frick and Jenna Howden were part of a 4-0 run that gave UMM a 16-12 lead. A 6-0 spurt gave the Cougars a 22-15 edge. Sierra Nori delivered two aces. A Rachel Mathias kill gave the Cougars a 2 sets to 0 lead.

The Cougars jumped out to a 10-2 lead in the third and did not look back in obtaining the straight sets win.

UMM won four the five matches during the stretch including all three conference matches.

Minnesota Morris (18-10, 12-3 in UMAC) is off until Saturday when they host a triangular with UW-Superior and Augsburg beginning at 3 p.m. at the PE Center.