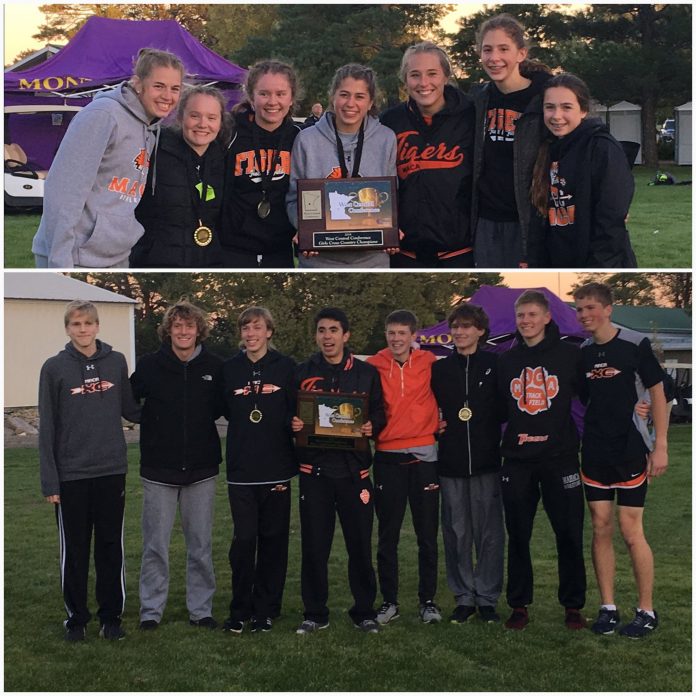 For the Tiger girls, this marks their fifth straight conference title, led by a second and third place finish from Maddie and Meredith Carrington. Maddie finished 23 seconds behind medalist winner Sophia Kluver from Sauk Centre.

Caryn Marty (11th), Crystal Nohl (12th), and Malory Anderson (15th) each placed in the top 15 as well. As a team the Tigers took first ahead of Sauk Centre and Melrose.

The Tiger boys were led by medalist winner Noah Stewart who put his stamp on a highly successful conference season.

As a team the Tiger boys finished ahead of Melrose and Benson/KMS.

Riley Decker had 13 digs while Kramm added seven, and the Tigers go into the postseason on a six-match win streak with a 16-7 record, 9-5 in the West Central Conference.

Botker reached the milestone midway through the third set on her 13th kill of the night. Botker finished with 14 kills and six digs, Reanna Ward provided the power in the middle with 10 kills.

Mataiah Turner and Jessica Moberg each tallied nine digs while Tylaina Issendorf and Lora Botker combined for 22 assists. The Wolverines have won eight straight and are 19-3 on the season, 8-0 in conference play.

The Warriors got six kills from Kaylynn Doll and Kennedi Wright. Wright added five digs with three aces, Maycee Tolifson and Lexi Hanson each had six digs and Haley Johnson chipped in with eight assists. The Warriors are 12-9, 5-3 in the conference.

As a team the Chargers had 20 aces at the line, seven by Madison Quinn, six from Bailey Schaefer, and five from Sara Jacobson.

Quinn added 22 assists and Schaefer led with nine kills, Mikenna Pattrin had eight as the Chargers improve to 18-6, 10-0 in the Little Eight Conference.