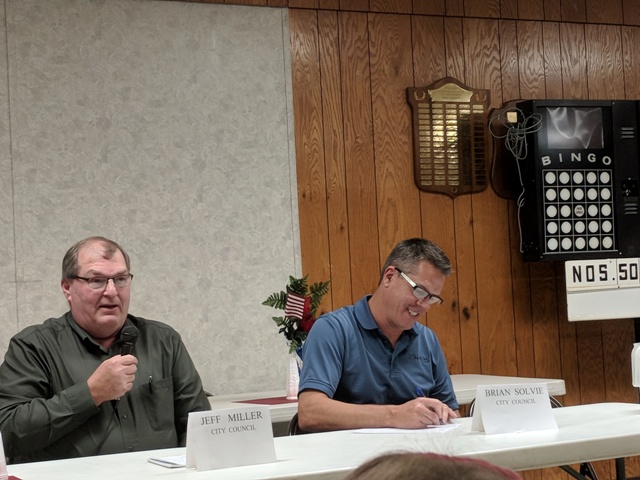 Two incumbent members of the Morris City Council are vying for the two open seats on the Council in the November 6 election, and they were both at a Candidates Forum held this week at the American Legion in Morris.

Jeff Miller is a postal carrier in his 12th year on the City Council. He told the gathering that he was proud of projects like putting LED lighting on the streets, which he said has saved more money in energy costs than what the city paid for the system; and the city’s ability to spend $400,000 annually to fix roads from an assessment on utility bills. He also defended the use of Tax Increment Financing for providing long-term benefits for the city.

Brian Solvie has been on the Council for 6 years. He said the almost-completed water treatment plant will be a “very big improvement” for the City of Morris, and expressed his desire to see a solar park put up, with the help of the University of Minnesota Morris. Solvie expressed support for working with other organizations and agencies to get projects done more efficiently.

The event was sponsored by the auxiliaries of the Legion #29, VFW 5039 and AMVETS 290. You can hear the complete Candidate Forum on our website, kmrskkok.com