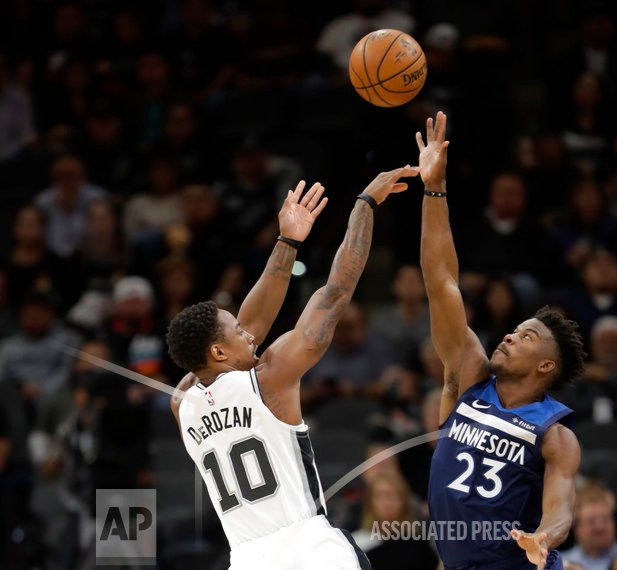 SAN ANTONIO (AP) — DeMar DeRozan had 28 points in his San Antonio debut, LaMarcus Aldridge added 21 points and 19 rebounds and the Spurs overcame a 23-point performance by Minnesota’s Jimmy Butler in a 112-108 victory over the Timberwolves on Wednesday night in a matchup of teams coming off a tumultuous offseason.

DeRozan was acquired from Toronto after the Spurs responded to Kawhi Leonard’s trade demands by dealing their star forward and Danny Green for the Raptors’ All-Star guard and Jakob Poeltl.

Minnesota is facing a similar trade demand from Butler, who has opted to play through it. Butler, who has told Minnesota that he will not resign with the team in the offseason, added seven rebounds and three assists in an active 31 minutes.

DeRozan banked in the eventual game-winning shot in the final minute against Butler, driving hard to the basket against the 6-foot-8 forward and then pulling up from 12 feet to give San Antonio a 110-108 lead with 32.4 seconds remaining. DeRozan sealed the victory with a pair of free throws with 7.8 seconds remaining after Minnesota’s Derrick Rose missed a runner in lane.

Rudy Gay had 18 points and Bryn Forbes had 11 points in his first start at point guard for the Spurs.

San Antonio led by as many as 11 points in the first half, but Minnesota went on a 12-4 run late in the second quarter to pull within 48-46 and shift the early momentum. Butler, Teague and Wiggins were the only players to score during that run.

Karl-Anthony Towns picked up his third foul with 2 minutes left in the first half and fouled out with 4:18 remaining in the game and the Spurs up 99-92. Towns finished with eight points and nine rebounds in 22 minutes.

Timberwolves: Teague was down on the court for about 10 seconds in the fourth quarter after tweaking his right ankle on an offensive foul, but gave officials a thumbs up and remained in the game. . Minnesota is 3-10 all-time when opening the season on the road. . The Timberwolves are 9-50 against the Spurs in San Antonio. Their last win in San Antonio was April 17, 2013. . The Timberwolves have seven new players on its roster, but returned all five starters and its first three players off the bench. . Minnesota had nearly every player available on its roster, except for center Justin Patton, who is out indefinitely following right foot surgery.

Spurs: San Antonio had eight new players on its roster for the season opener for the first time since 1992. The Spurs finished 42-33 that season after firing Jerry Tarkanian 20 games into the campaign. . DeRozan has played 23,000 minutes in his career, joining Aldridge, LeBron James, James Harden and Russell Westbrook as the only players to do so since 2009. . Gay was wincing after stumbling when a defender backed away from him on a backdown, but did not go to the locker room. . Poeltl made just his fifth career start and first since Feb. 14 2017 with Toronto.