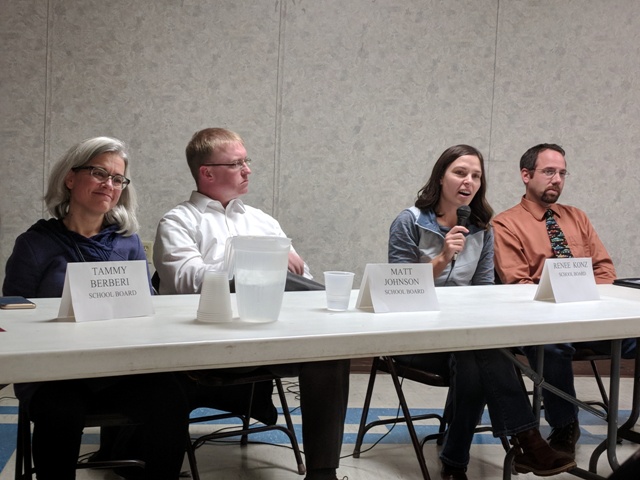 Five of the six candidates running for election to the Morris School Board were on hand for a Candidates Forum earlier this week at the American Legion in Morris. Incumbent Doug Stahman was out of town and absent for the event, which was sponsored by the auxiliaries of the Legion #29, VFW 5039 and AMVETS 290.

Tammy Berberi, an associate professor of French at the University of Minnesota Morris, said she is motivated to run for school board because of the positive experiences her kids have had in the school. She wants to Pay it Forward following her own school experiences, where she received a lot of support as a child growing up with a disability.

Matt Johnson, the interim athletic director at the University of Minnesota Morris, said both of his parents were educators and after offering his opinions on educational issues over the years, he decided to run for the board. He is married to Abbey Johnson, a first grade teacher at Morris Area Elementary School.

Renee Konz spent six years on the board of the Morris School Foundation, the last five as its President, and helped pay out over half a million dollars in the past six years for a variety of school projects, equipment and student opportunities. She is a financial controller at Riverview Dairy, which she said has given her an opportunity to interact with many in the Hispanic community.

Incumbent Mike Odello, who was a teacher for 10 years and also works at Sarlette’s Music, said he wants to continue helping the underrepresented and protected class of students in our system during a second term. Odello was proud of the Bond Referendum which helped pay for improvements to the high school, a move he said was “a huge step in the right direction.” He was also proud of his commitment to the mental health of students, seeing an increase in the number of school counselors during his first term.

April Taylor worked for 4 and a half years as a Technology Coordinator for the School District, a position which she said allowed her to establish relationships with the teachers. She is also a member of the Standing Rock Sioux Tribe, established the American Indian Parent Advisory Committee and spearheaded the American Indian Education Program Plan. She noted the district has 40 Native American students, “some with blonde hair,” and hopes to help with technological initiatives and issues of equity.

You can hear the complete Candidate Forum on our website, kmrskkok.com.