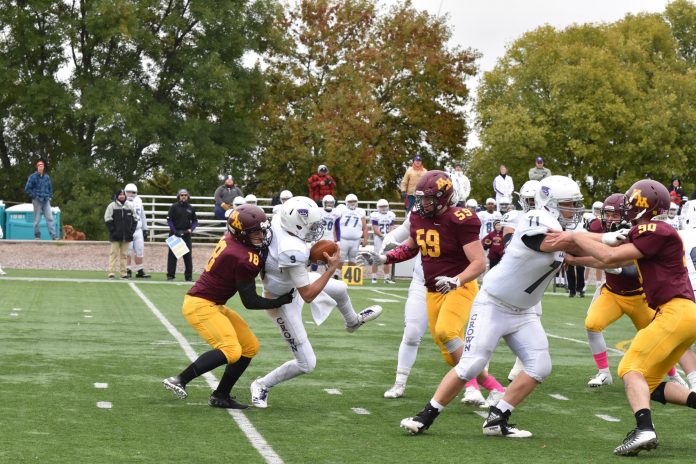 FOOTBALL
FULTON, Mo. – Last Saturday, the Minnesota Morris defense forced six Northwestern turnovers. They would tally four more turnovers Saturday, but came out on the losing end of a, 25-7, decision against Westminster in UMAC football action in Fulton, Mo.

Westminster drove into Cougar territory on both first quarter possessions, but the UMM defense kept the Blue Jays off the scoreboard. Westminster drove to the UMM 27 on the first drive before getting turned away on a fourth down try. Then Royal Weber intercepted a Trent White pass at the 3 to halt another drive.

In the first possession of the second quarter, the Blue Jays again drove into Cougar territory, but the defense held tight as Marcos Luna forced a fumble at the UMM 22 that was recovered by Brady Jergenson.

Towards the end of the half, Westminster drove into UMM territory for the fourth time and for the fourth time, the Cougar defense did not allow the Blue Jays to score. The Cougars forced an incompletion on a fourth down pass at the UMM 21 and the two teams would go into halftime scoreless.

The Blue Jays finally broke through on the opening possession of the second half. They drove 58 yards on 11 plays that ended with a Ketrick Large 2-yard touchdown run to break open the scoring at 6-0. Westminster would score again on their next drive as White took it in from 21 yards out to give the Blue Jays a 12-0 lead.

The Cougar offense would make some noise after the Westminster score. Justin Masloski found Carter Geyer for a 37-yard touchdown connection to pull the Cougars within 12-7 with 5:35 remaining in the third.

Westminster quickly answered though as White took into the end zone from 41 yards out on a 4th-and-1 to put Westminster up 19-7 at the end of the third.

White used his arm in the fourth quarter as he connected with Alec Fleetwood on a 48-yard score to finish out the scoring.

Drew Shipley led the Cougars Saturday with 10 tackles and one sack. Joseph Loija and Brett Jansen also recorded a sack.

VOLLEYBALL
MORRIS, Minn. – Minnesota Morris welcomed stiff competition to the PE Center Saturday for a home triangular in UW-Superior and Augsburg. The Cougars stepped up to the challenges as they topped UW-Superior in the opener in four sets then closed the night with a sweep of Augsburg.

The Cougars dropped a tight five-set match at Superior earlier this season and the two dueled to another grueling first set to the open the festivities. UMM trailed 15-11, but rattled off five of the next six points to pull even at 16. Layne Herrmann started a three-point spurt with a kill then ended it with an ace to give the Cougars a 19-17 lead. The Cougars would later go up 24-22 following a Tori Everson kill. UWS scored the next two points to extend the set. It was still tied at 27 when a block from Morgan Miller and Herrmann and another Herrmann service ace gave the opener to the Cougars, 29-27.

Minnesota Morris used a 7-0 run to break open another tight set late in the second. Down 17-16, Everson provided two service aces in the spurt that put the Cougars up, 23-17. A Brenna Tinjum kill gave the Cougars a 25-19 set win and 2 sets to 0 lead.

Tinjum led the Cougars with 16 kills. Rachel Mathias had 13 and Whitney Schwartz added 12. Herrmann totaled 42 assists to go along with 14 digs. Alyssa Ukestad dug out 15 balls.

Another 5-0 run aided the Cougars’ effort in the second set. Trailing 7-6, Nori ended the run with back-to-back service aces and the Cougars would not trail again in gaining a two-set lead.

Another well-timed spurt propelled a third set win. Tied at 17, a UMM 4-0 run gave them a lead they would not relinquish. Kills from Mathias, Tinjum, and Herrmann ended the match.

Minnesota Morris (20-10, 13-3 in UMAC) closes out regular season play with a non-conference home match Tuesday with Concordia-Moorhead at the PE Center. The Cougars have qualified for UMAC postseason play and will be no lower than a No. 3 seed for the conference tournament.

Denis Ostroushko got the scoring off for the Cougars with a goal in the 21st minute. Four minutes later, Liam Easter tallied his first goal of the season to extend UMM’s lead to 2-0.

The Cougars held a 6-3 advantage in total shots in the first half. UMM put on more pressure in the second half, outshooting the Jacks 13-1 to hold a 19-4 edge throughout the entire 90 minutes.

Matt Marshall made two saves in net for the Cougars. Minnesota Morris (6-9-3, 6-3-2 in UMAC) heads out of conference for a game Tuesday at St. Olaf.

WOMEN’S SOCCER
ASHLAND, Wis. – Minnesota Morris got on the scoreboard first, but Northland answered with two goals to come away with a 2-1 victory over the Cougars Saturday in UMAC women’s soccer action in Ashland.

After neither team scored in the opening 45 minutes, the Cougars did not waste much time getting the ball into the net in the second half. Sam Tate’s fifth goal of the season, with assistance from Brooke Lorentz, gave UMM a 1-0 lead in the 47th minute.

Northland’s Kaiya Voldberg secured the equalizing goal in the 60th minute. Asha Ritchie put the Lumberjills in front with a tally in the 72nd minute. Northland outshot the Cougars, 9-5, in the second half and held a 15-9 edge throughout the contest.

Bailey Tschida made six saves in net for the Cougars.

Minnesota Morris (6-9, 6-5 in UMAC) closes out the regular season with a home contest against UW-Superior next Saturday at the Cougar Soccer Field.