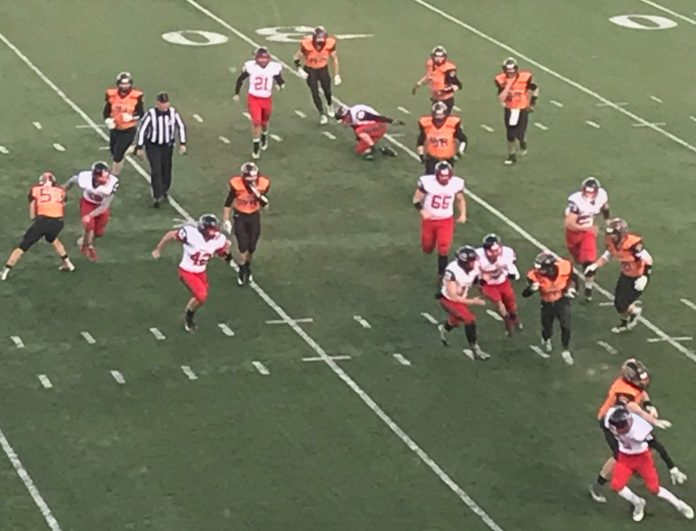 In a game dominated by defense, the game was scoreless going into the fourth quarter when Eli Grove’s 26-yard field goal gave the Tigers a 3-0 lead.

The Knights took the lead on Scot Johnson’s three-yard touchdown run with 2:32 left. With their season hanging in the balance, the Tigers had the ball on their own 30 with just over a minute to go.

They drove down to the Knights eight yard line when Johnson went up to grab the go-ahead score, a late interception by the Tigers sealed the win.

Decker finished 5-5 for 42 yards passing, Camden Arndt ran for 100 yards on 22 carries, Kenny Soderberg and Joe Kleinwolterink each grabbed an interception as the Tigers improve to 6-3 and will face top-seed Pillager on Saturday night at 7:00.

The Tigers held the Knights to just 188 yards of total offense, 76 through the air by Isiah Sykora on 5-8 passing, Christian Norby ran for 63 on 12 carries as their season ends with a 4-5 record.

The Owls ran for 359 yards, while holding the Chargers rushing attack to just 47 yards.

Tyler Timmerman ran for 233 yards and three touchdowns on 27 carries, Jed Feuchtenberger complimented that with 100 yards and two scores.

Trailing 16-0, the Chargers got a 49-yard touchdown pass from Keagan Schiele to Marshall Riedel to pull within 10, but the Owls responded by scoring 20 unanswered points to put the game out of reach.

Peyton Rohloff and Gideon Joos led the Owls defense with six combined tackles-for-loss and Hancock improved to 6-3. They will head to Verndale on Saturday to face the top-seeded Pirates in the semifinals at 2:00 on Saturday.

Schiele was 8-17 for 106 yards with a touchdown and interception, Chris Vinson had 11 tackles and Cade Carlson added 10. The Chargers end the year with a mark of 4-5.

Zane Swanson ran 15 times for 166 yards and three touchdowns to lead the Rockets into the section semifinals on Saturday.

Swanson opened the scoring in the game’s first minute with a 43-yard touchdown run, adding scoring runs of 18 and 36 yards. The Rockets are 8-1 and will host Wheaton/Herman-Norcross at 2:00 on Saturday.

Nate Moberg ran for 143 yards and two touchdowns for the Wolverines who end the season at 3-6.

The Bears took a 14-6 lead into halftime, and held a 22-16 lead late in the third before the Warriors took control.

Nelson Schmidt accounted for 244 yards and four touchdowns, Christian Krump had 72 yards rushing with a touchdown and the Warriors improved to 7-2 on the season. The Bears season ends with a mark of 4-5.

Tyson Meyer ran for 192 yards and three touchdowns, Ryan Amundson ran for 97 and a score, throwing for 93 more as the Lakers improve to 7-2.

Minnewaska will host ACGC on Saturday at 2:00.

Matt Tolifson had four catches for 101 yards and a score for the Braves who end the year 0-9.