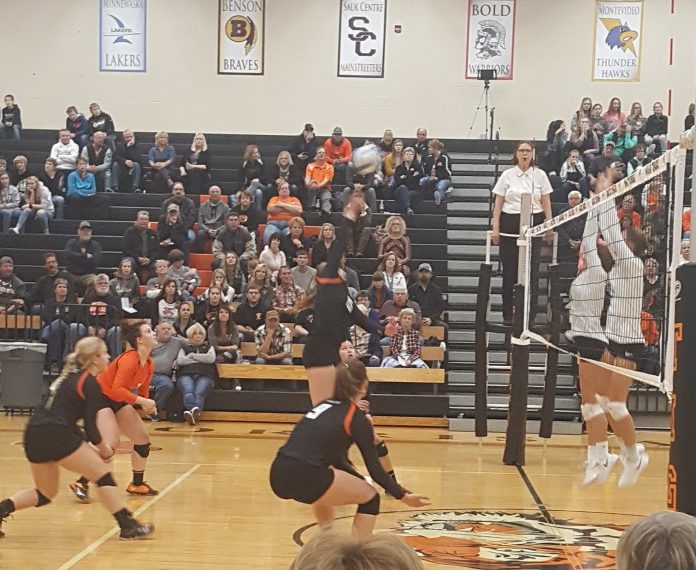 In set three the Lakers jumped out to a 10-5 lead, but Mackenzie Stahman’s serving helped the Tigers scored 20 of the next 25 points, winning 25-15.

The Tigers are 17-7 and will host Eden Valley-Watkins on Tuesday at the Tiger Center.

Ellie Danielson had eight kills for the Lakers who end the year 9-15.

After the Warriors took the first set 25-21, they were on the brink of a taking a 2-0 lead with a 23-16 advantage in the second set, but the Chargers called a timeout to regroup, and came back strong to steal the set 26-24.

Bailey Schaefer had 18 kills, Mikenna Pattrin added 13, and Madison Quinn recorded 42 assists. The Chargers move to 19-6 and will face Henning at 7:30 from Barrett on Friday.

CGB served 72-72 on the night and got 11 kills from Emma Botker, 19 assists from Lora Botker with Tylaina Issendorf adding 17, and Mataiah Turner added eight kills, 16 digs, and three blocks.

The Wolverines are 23-4 and face Underwood on Friday. The Knights season ends with a record of 10-14.

Section 6A Meet
NEW LONDON – Morris Area/Chokio-Alberta will send four runners to the state cross country meet after their performances on Thursday at the section 6A meet in New London.

Solomon Johnson took eighth and Noah Stewart was right behind in ninth place and each earned a spot at the state meet.