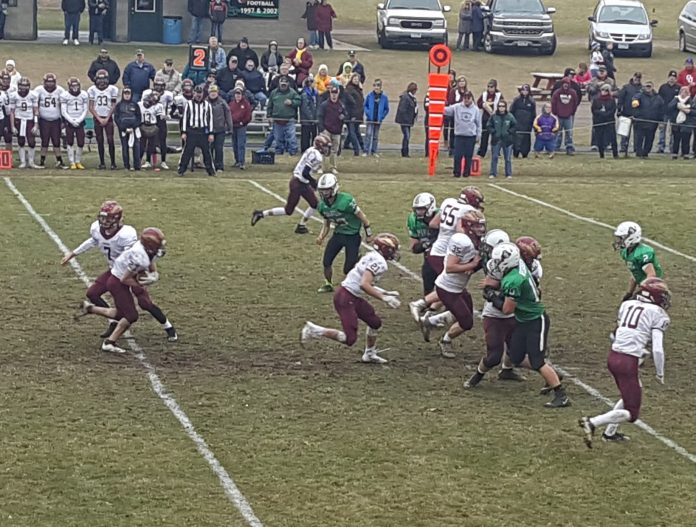 The Huskies controlled the game with 244 yards rushing, including 110 and two touchdowns from Tucker Peterson.

After Jack Bentson’s three-yard touchdown run in the first quarter, Peterson added another from ten yards out early in the second and the Huskies took a 14-0 lead into halftime.

Camden Arndt put the Tigers on the scoreboard with a 13-yard touchdown run in the third, but the Huskies’ Luke Woidyla and Peterson added touchdowns in the fourth.

Arndt carried 12 times and was bottled up to 54 yards, Durgen Decker was 6-20 passing for 54 yards and an interception.

The Tigers season ends with a 6-4 record, the Huskies are 9-1 and face Osakis for the section championship on Saturday.

Sec. 4 (9-Man) Semifinals
(1) Verndale 36, (4) Hancock 29
VERNDALE – Verndale converted a fourth-down with two minutes remaining, and were able to run the clock out to hang on for a 36-29 win over Hancock on Saturday.

The Owls overcame a rough start to take a 7-6 lead after Preston Rohloff hit Cole Reese for a 10-yard touchdown.

Tate Bounds threw a pair of touchdowns in the second for the Pirates, but Rohloff’s 64-yard touchdown pass to Tyler Timmerman sent the Owls into halftime down just seven at 20-13.

Jarret Kveton’s 68-yard touchdown run opened the second half and put the Pirates up two scores, but Hancock’s Gideon Joos’ scoring run pulled the Owls back within seven going into the fourth.

The back-n-forth battle continued in the final quarter when Verndale’s Craig Orlando ran for a 50-yard touchdown, but the Owls came back with one-yard touchdown from Rohloff.

Rohloff finished 16-33 passing for 232 yards and two touchdowns with another rushing, Timmerman had five catches for 133 yards and a score, he ran for 48. Harrison Zeltwanger anchored the defense with seven tackles but Hancock’s season ends with a 6-4 record.

Kveton rand for 145 yards and the Pirates are 10-0, they face Underwood for the section title on Friday.

Nelson Schmidt scored on a three-yard run in the second quarter to give the Warriors a 6-0 lead at halftime, but the Rockets tied it early in the second half on a 10-yard touchdown run from Zane Swanson.

Swanson added a short touchdown run early in the fourth to take the lead.

Schmidt rand for 46 yards, throwing for 86, Hunter Johnson caught seven passes for 57 yards as the Warriors season ends with a mark of 7-3.

Ryan Amundson ran for 72 yards and threw for 51, the Lakers are 8-2 and face top-seed Paynesville on Friday.

Michael Trebil threw for 89 yards, ran for 87 as the Falcons season ends at 5-5.

SWIMMING & DIVING
Minnewaska/MACA/Benson’s Lacey Entzi has earned all-conference honors in swimming and diving. Entzi’s honor comes for her performance in the individual medley.