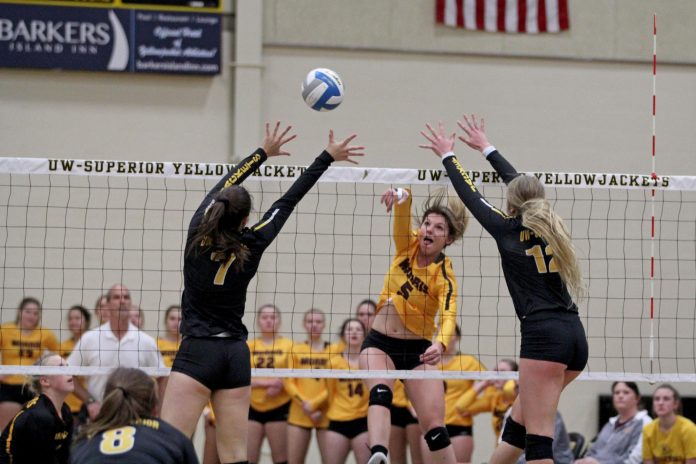 VOLLEYBALL
SUPERIOR, Wis. – Minnesota Morris came back from a 2 sets to 1 deficit to down UW-Superior in a five-set thriller Wednesday night in a UMAC semifinal match in Superior. The Cougars advance to their sixth straight meeting with Northwestern in the UMAC championship match Saturday night.

The two teams split their regular season meetings with the Cougars winning a 4-set match 11 days ago in Morris. UMM used that momentum to get off to a good start Wednesday. They jumped off to a 10-4 lead in the first following a three-point spurt that featured kills from Tori Everson and Rachel Mathias and a service ace from Sierra Nori. UWS pulled within 17-14 until a 4-1 Cougar run crept the lead back to 21-15. A Layne Herrmann sneak kill closed out the first set, 25-19, in favor of the Cougars.

The Yellowjackets took the next two sets by identical, 25-21, scores to take a 2 sets to 1 edge.

The Cougars were not ready to go home as they took the fourth set, 25-16, to force a decisive fifth.

UMM trailed 5-3 early on until a Mathias kill and an Everson aced tied it at 5. Later, tied at 8, the Cougars used a hugh 4-0 run to take control. A Brenna Tinjum kill and an Allison Yang ace started the spurt. UWS pulled within 13-11 until a Mia Frick kill and a UWS error gave the Cougars the come-from-behind win.

Minnesota Morris (21-11) advances to face Northwestern in the UMAC championship match, for the sixth straight season, Saturday night at 7 p.m. in St. Paul.

WOMEN’S BASKETBALL
ST. PAUL, Minn. – A season ago, the Minnesota Morris women’s basketball team finished in a tie for second place in the final Upper Midwest Athletic Conference (UMAC) standings. In the UMAC Women’s Basketball Preseason Coaches’ Poll announced Wednesday are the Cougars are tabbed to place third in the 2018-19 season.

Here’s a look at the rest of the conference provided by the UMAC:
ST. PAUL, Minn.—Heading into its fourth season in the Upper Midwest Athletic Conference (UMAC), the University of Wisconsin-Superior hasn’t lost a regular season conference contest which extends a streak of 48 games. Add in postseason games, and the Yellowjackets have won 54-straight against UMAC teams.

The Yellowjackets will look to extend that streak further in 2018-19 as they were again the favorite to win a fourth-straight UMAC championship in the Preseason Coaches’ Poll announced Wednesday.

In conference play last season, the Yellowjackets won 14 of 16 games by 10 points or more. The Yellowjackets boasted a remarkable 24.8 points per game (ppg) scoring margin in UMAC games which was nearly 13 ppg more than Bethany Lutheran that was second. They also scored 74.3 ppg and allowed on average less than 50 ppg.

If the Yellowjackets want to sustain their success, though, they’ll need to rely heavily on returning All-UMAC First Team performer Hannah Norlin after seeing three all-conference performers graduate including three-time Player of the Year Hailey Kontny. Norlin ranked in the top 10 in scoring (13.1 ppg) and rebounding (6.6 rpg) last winter. Eva Reinertsen should also be a strong contributor for th Yellowjackets as a junior.

The Vikings lost the conference title game to the Yellowjackets by just 12 points and they reload with a ton of talent that could help them dethrone the ‘Jackets this season. Haley Sandin enters her fourth season leading the Vikings after tallying 18.4 ppg to lead the confernce year ago. She is joined by last season’s rookie of the year Abby Olson and fellow sophomore Hannah Geistfeld who each averaged in double figures a year ago.

The University of Minnesota Morris was picked third by the coaches with 48 points, but the University of Northwestern trailed by just one point with 47 points and collected one first-place vote. The Cougars return a lot of talent in First Team pick Elli Stevenson and Second Team selection Kendra Raths with the hopes of shaking up the conference standings. The Eagles will look to make moves up the standings as well and will be well-positioned to do so with decorated All-UMAC performer Amy Berglund set to return for her senior season.

The College of St. Scholastica was selected fifth in the poll with 36 points and was followed in sixth by Martin Luther College with 25 points. All-UMAC Second Team pick Michaela Walther will look to lead the Saints to a second-straight UMAC postseason berth, while Emily Witkowski will attempt to lead the Knights back into the playoffs after they missed out in 2017-18.

Most UMAC squads open up the 2018-19 season with non-conference action next weekend beginning Thursday, Nov. 8. Coference play then begins Wednesday, Dec. 5 and runs through Dec. 15-16 before the holiday break. Games begin again Wednesday, Jan. 2. The season concludes Saturday, Feb. 16 with the conference tournament set for the week of Monday, Feb. 18.