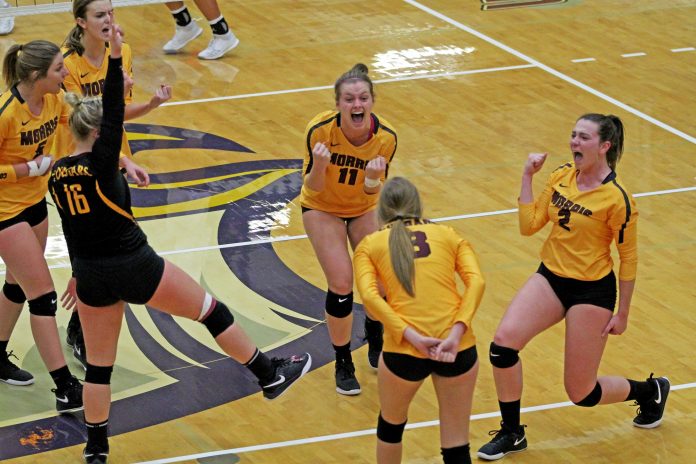 VOLLEYBALL
ST. PETER, Minn. – Last Saturday, the Minnesota Morris volleyball team made history by claiming their first UMAC tournament championship and program’s first NCAA Tournament berth by defeating Northwestern. Friday night, they made more history by winning the program’s first NCAA Tournament match by topping No. 8 Gustavus Adolphus in straight sets (26-24, 25-22, 25-20) in a first round match in St. Peter. The Cougars advance to face Saint Benedict in a second round NCAA Tournament match tomorrow at 4 p.m. in St. Peter.

The Cougars showed no jitters in their first ever NCAA match by taking sizable leads in every set against the MIAC regular season and tournament champion who lost only two matches all season. In the opening set, the Cougars broke open a 9-9 tie with a 4-0 run started by a Tori Everson kill. Later, another Everson kill started a 3-0 run that gave UMM an 18-11 lead. Gustavus fought back to tie it at 22 and would take a 24-23 lead. A Gustavus service error tied the set at 24, another Everson smash gave the Cougars the lead and a Sierra Nori ace closed out the set in favor of the Cougars.

Like in the previous sets, another run gave the Cougars a mid-set lead. Kills from Everson and Tinjum closed out a 6-1 run that gave UMM a 15-11 edge. The Gusties pulled within two at 20-18 before the Cougars would close out the set and match with a 5-2 run. A Schwartz kill put the Cougars on the brink of victory. Two points later, a Gustavus kill attempt went wide and the Cougars celebrated an historic victory.

Mathias and Schwartz led the Cougars with 11 kills each. Tinjum recorded a double-double with 10 kills and 11 digs. Also getting a double-double was Layne Herrmann who dished out 33 assists and dug out 17 balls.

Minnesota Morris (23-11) moves on to face another MIAC foe in Saint Benedict who defeated No. 16 Pacific Lutheran in four sets Friday. This is a rematch of a January match where the Cougars topped the Blazers in four sets in St. Joseph.

Papke, junior, received the Liberal Arts Conference Women’s Swimmer of the Week award. She won both of her individual events, going her fastest untapered time in the 200 IM at 2:20.05 and hitting the wall at a 1:04.20 in the 100 back. Starting the 400 free relay, she put them in the lead with a time of 57.11, contributing to their 1st place finish.

Viniski, Papke, and the Cougars will hit the pool again on Friday at Northern State in Aberdeen, S.D.

UMM opens the regular season on Monday when they face St. Johns in Collegeville.