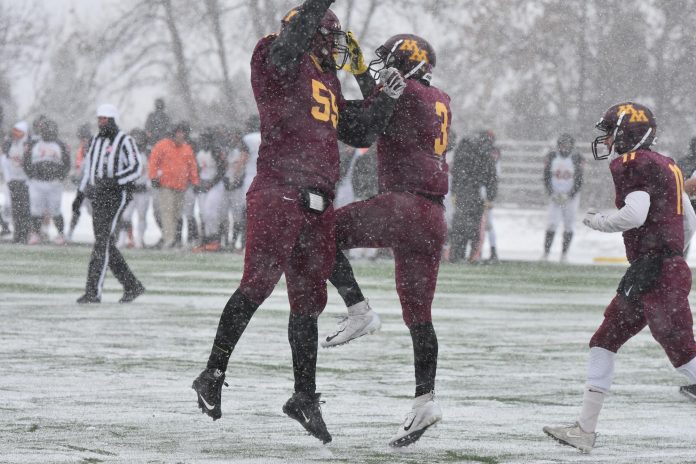 FOOTBALL
MORRIS, Minn. – Through snowy conditions and below zero wind chills, the Minnesota Morris football team sent their five seniors out in style with a 21-13 season-finale win over Greenville Saturday at Big Cat Stadium in UMAC action.

Despite the bitter cold, both offenses would get in the end zone on their first possessions. Greenville drove 60 yards on nine plays on their opening drive that ended with a 2-yard Christian Moss touchdown rush and a 7-0 Greenville lead.

Kicking off into a stiff wind, the Panther kick fluttered in the air that bounced off a Cougar into the arms of a Greenville player. UMM’s Royal Weber quickly gave possession back to the Cougars as he intercepted a Dalton Mitchell pass at his own 32.

The Cougars would drive 68 yards on just six plays to even the score. Justin Masloski started the drive with a 29-yard connection with senior Steven Severson. Masloski then rushed for 18 yards down to the Greenville 21. Three plays later, Masloski hit Nathan Sheridan for a 5-yard touchdown to tie the game at 7 with 6:07 left in the first quarter.

The score would remain tied at 7 going into halftime thanks to the Cougar defense. Early in the second quarter, Greenville drove down to the UMM 17. The defense forced a fumble that senior Trent Maloney returned 49 yards to keep the game tied.

After an elongated halftime to allow the players to thaw out in the locker room, the Cougars came out on fire in the second half through a continuous snowfall. On the first play of the half, Masloski called his own number, got loose down the left sideline and scampered 75 yards for a Cougar touchdown that gave them a 14-7 lead.

After needing just one play to score on their opening drive of the half, the Cougars used 12 plays to score again on their next possession. Masloski connected three times with Severson on pass plays during the 76-yard drive that ended with a Severson 8-yard touchdown reception in the right flat for a 21-7 UMM lead with 4:49 remaining in the third.

Greenville quickly countered though as Eric Kranh rushed 59 yards for a touchdown to pull the Panthers within 21-13 following a fumble on the point after attempt.

On the opening drive of the fourth quarter, Greenville drove 53 yards on 14 plays to the UMM 8. On a fourth-and-goal, senior Nathan Gehlen put an end to the Panther drive with a huge eight-yard sack to give the Cougars possession.

UMM expertly used clock on the ensuing possession. Without scoring, the Cougars drove 64 yards on 11 plays, but used 6:10 of the clock, leaving Greenville only 2:46 remaining to drive 80 yards to try to even the score. Greenville was unable to get passed midfield the rest of the game giving the Cougars the victory.

Masloski had a great all-around effort with 144 yards passing and 150 yards rushing while accounting for three touchdowns. Severson caught four balls for 59 yards and Caleb Kemp rushed for 50 yards.

Nikolas Pahno and Maloney led the Cougars with 12 tackles each. Preston Fifarek added 11 stops. Geheln collected two and a half sacks to go along with eight tackles.

Minnesota Morris closes the season with a 3-7 overall record and 3-5 mark in UMAC play.

Saturday’s contest was a rematch of a late September tilt in St. Joseph that the Cougars won in four sets. After two sets were in the books Saturday, it appeared the Cougars would repeat that performance as they took a 2 sets to 0 lead on the Bennies with identical 25-23 set scores.

Like Friday, the Cougars appeared un-phased by the national tournament atmosphere. Aided by a 6-0 run, the Cougars raced out to a 12-4 lead in the first. Rachel Mathias, Layne Herrmann, and Tori Everson all delivered kills to help give UMM the early edge. St. Ben’s would rally to pull within one at 16-15. A Mathias kill helped stretch the lead back to three at 19-16. Later, a 4-0 CSB spurt gave them a 22-21 lead. A Morgan Miller block tied the set at 22. Brenna Tinjum started a 3-0 closing set run with a kill that Everson ended with a smash and 1-0 Cougar lead.

The Bennies jumped out to a 10-5 lead in the second set. They still led by five at 16-11 before the Cougars started climbing back in. A block assist by Mathias and Whitney Schwartz and a service ace from Sierra Nori pulled UMM within 18-16. Later, down three, a 4-0 Cougar run, aided by three consecutive kills from Tinjum, gave them a 22-21 advantage. A Schwartz kill and an Alyssa Ukestad ace closed out the set in favor of a two-set Cougar lead.

St. Ben’s dominated the next two sets to force a decisive fifth. Back-to-back kills from Mathias gave UMM a 2-1 lead. She would add two more kills as the two teams were tied at 8 in a back-and-forth affair. The Bennies took control from there scoring five of the next six points to take a 13-9 lead. Back-to-back kills by Tinjum pulled UMM within 13-11, but CSB would close out the set and match with two straight points.

Minnesota Morris finishes the season with a 23-12 overall record.

The Cougar women placed second among UMAC teams coming in 21st place. UMAC Individual champion Katherine Novak had the top Cougars time over the six-kilometer course with a clocking of 23:54.9.

Tyler Sassenberg had the top time for the Cougars with a clocking of 26:31.8 over the eight-kilometer course.

The Cougars’ indoor track and field season commences November 30 in Brookings, S.D. at the SDSU Holiday Multi and Open.

The indoor track and field season starts November 30 at the South Dakota State Holiday Open and Multi in Brookings.