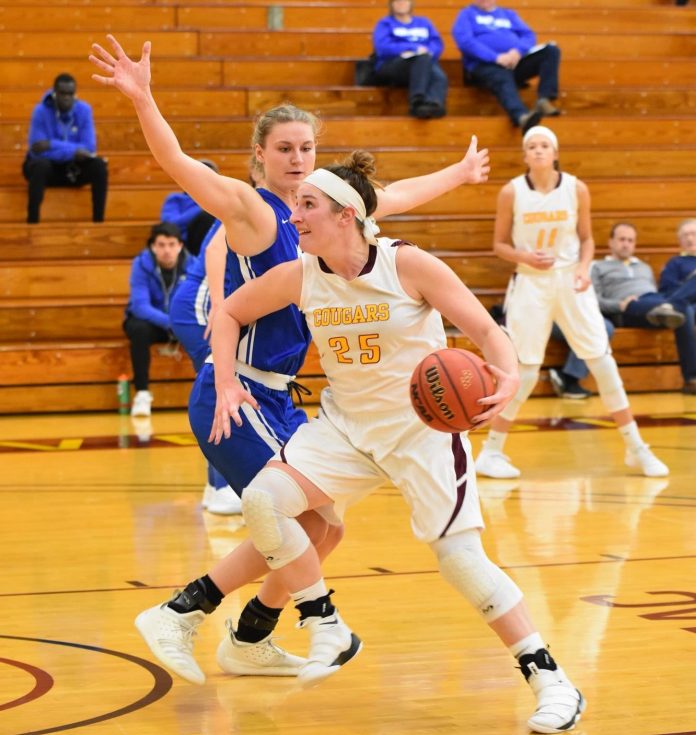 WOMEN’S BASKETBALL
MORRIS, Minn. – Aiming to head into the Thanksgiving break with a win, the University of Minnesota-Morris hosted a non-conference game with Mayville State University.
It was a tight contest early, but turnovers and a stifling defense proved too much for the Comets.

Forcing 20 turnovers and capitalizing at the free throw line, the Cougars raced to a 62-43 win over the Comets Tuesday night inside the P.E. Center.

The Cougars starting out strong, grinding to a 5-point lead early in the contest. The Comets tied the game 5-5 with 6:27 left in the first quarter, but the Cougars did not allow the score to be tied for long. Less than a minute later, Becca Holland found Lexie Winters – who connected on a shot from beyond the arch – put the Cougars back in the lead. Winter’s layup 2:03 left in first quarter would increase the Minnesota Morris lead. It was a good showing for Winters, going 3-for-5 for eight points.

In the second quarter, the Comets appeared to gain momentum, taking the lead midway through the quarter. However, the Cougars kept it close for the remaining 5:46 in the half, with their largest deficit being five points. At the end of half, Comets had the lead 25-21. Facing a small deficit to start the second half, Kendra Raths brought the game to 25-25 tie after driving the lane for the layup. Shortly thereafter, Elli Stevenson’s bucket gave the Cougars a two-point lead.

Then the Cougars took off.

Minnesota Morris outscored the Comets 16-2 to build a 38-27 lead. Continuing their impressive run of stifling defense and hot shooting in the final quarter, the Cougars sustained a 19-point lead with 1:54 left in the game.

Stevenson led all scorers with 14 points, followed by Raths with 12. Lexus Eagle Chasing, Holland, and Van Kempen each pulled down eight rebounds.

The Cougars (1-3) will face the University of Wisconsin-Eau Claire Saturday, Nov. 24 at home on Jim Gremmels Court. Tip-off is set for 2 P.M

MEN’S BASKETBALL
MORRIS, Minn. – Fresh off a game against a Division 1 opponent in the University of North Dakota Saturday in Grand Forks, N.D. that showed signs of promise, The University of Minnesota Morris Men’s basketball team played host to Mayville State University in the finale of a double-header Tuesday at the P.E. Center.

The score might not have been favorable to the Cougars, but again, signs of promise were on display.

After igniting to a 20-9 run early in the first quarter, the Comets were able to come away with a 86-64 win over the Cougars in Non-conference action.

In the first half, it appeared as if the Comets were simply a step ahead of Minnesota Morris. With a blend of crisp passing and great ball movement on the offensive end, Mayville State rarely faced a contested shot. On the other end of the floor, it seemed as if the Cougars were unable to come up with the answer for the sticky, stifling defense of the Comets. Mayville entered the half with 49-29 lead over the Cougars.

That is, until a pair of seniors caught their groove.

Battling the Cougars back to striking distance, Noah Grove and Jeffery Halverson each registered 18 points to cut the deficit. Grove’s jumper at the 7:04-mark of the second half managed to cut the Comets lead to 16. It was another strong showing for Grove, who has reached double figures in his last three games. In fact, his performance Tuesday is just one-point shy of his season-high. He was 6-for-16 from the floor, to include going 5-for-6 at the charity stripe. He also grabbed five rebounds and recorded a pair of steals.

Halverson reached double figures for the second time his season and set a new season-high with his 18 points. The senior went 7-for-12 from the floor – going 1-for-2 from beyond the arch – and a strong showing at the line, connecting on three of his five free throw attempts. He also hauled in eight rebounds to lead the team.

Trent Jerome was the spark off the bench for the Cougars tonight, leading all scorers off the bench with nine points after going 3-for-4 from the floor.

The Cougars (1-3) will play host to the University of Wisconsin-Eau Claire on Saturday, Nov. 24 in the finale of a double-header. Tip-off is set for 4 P.M.