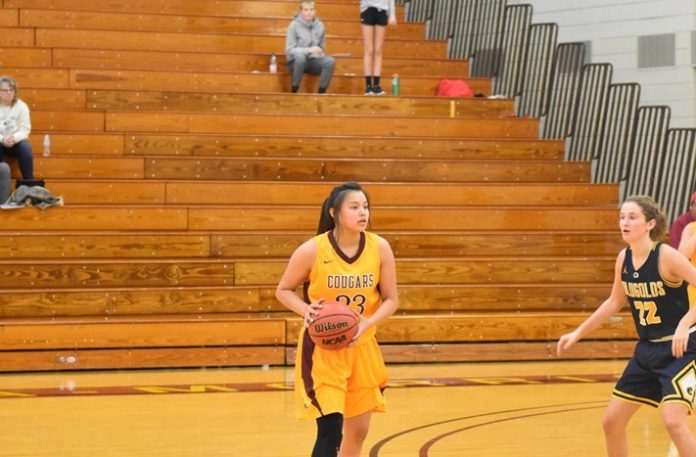 WOMEN’S BASKETBALL
MORRIS, Minn. – Making the quick turnaround after the holiday, the University of Minnesota Morris women’s basketball team played host to the University of Wisconsin-Eau Claire in a non-conference matchup inside the P.E. Center Saturday.

Through one half it appeared the Cougars were going to struggle with the stifling defense of the BluGolds.

Then in what has been typical UMM fashion, they mounted a rally.

Squashing a 16-point lead in the second half, the Cougars were able to fend off UW-Eau Claire to win 78-76 Saturday.

After a Grace Olson trey at the 6:54-mark of the fourth quarter cut the lead to four, the Cougars started to gain the game-changing momentum. A Kendra Raths three-point shot gave Minnesota Morris just its third lead of the game at 65-64. It was another strong performance for Raths, scoring 17 points, to include going 4-for-5 from the line.

After a pair of Eau Claire turnovers, Lexus Eagle Chasing stepped in front of a pass and raced down the floor for the layup, giving the Cougars what felt like a commanding 71-68 lead. Eagle Chasing came up big for the Cougars when it was needed most, knocking down a pair of treys in the first half to help alleviate the pressure from the methodical BluGold attack. It was a coming out party for the Freshman from South Dakota, scoring 17 points and registered a team-high four steals.

The Cougars were all, but out of the in the first quarter. Despite a diverse attack from Eau Claire, Minnesota Morris managed to keep the game within striking distance for much of the quarter. It wasn’t’t until the second quarter that the wheels started to become wobbly for the Cougars.

15 points off five three-point attempts was one of the key reasons the Cougars fell into the 16-point deficit. It seemed as if the BluGold knew where the Cougars were going to be defensively, always being one step ahead.

Coming out of the half facing a 48-36 deficit, a pair of key plays from Senior Elli Stevenson started to give the Cougars some traction. After forcing a turnover, the senior rushed down the floor and successfully connected on a lay-up attempt – despite being fouled – to cut the lead to nine. She would make the following free throw attempt. Stevenson had another strong performance for the Cougars, leading the team in scoring with 21 points.

The Cougars (2-3) will travel to St. Paul Tuesday to play Macalester College. Tip-off is set for 7 P.M.

MEN’S BASKETBALL
MORRIS, Minn. – The University of Minnesota Morris men’s basketball team played host to the University of Wisconsin-Eau Claire Saturday night in the finale of a double-header.

Looking to end a two-game losing skid, the start for the Cougars was less than ideal.

Surrendering an 11-2 run to start the game, Minnesota Morris was unable to mount a rally large enough to deplete the deficit, falling 75-54.

It was a healthy mix of cold shooting and stifling defense from each team in the early goings of the first half. In fact, the score was only 11-4 in favor of the BluGolds just midway through the quarter. For the first half, Eau Claire shot 33.3 percent while the Cougars held a slight advantage at 36.2 percent.

Then Eau Claire’s ball movement on offense started to open up the opportunities from beyond the arch.

Despite only making 6-of-their-17 attempts from beyond the arch, the BluGolds were able to continually capitalize on turnovers by the Cougars. Eau Claire was able to net 26 points off turnovers Saturday night, with 11 of those turnovers coming in the first half. The Cougars were able to force just eight for the game.

Jeffrey Halverson would connect on a three-point attempt at the 8:54-mark of the first half cut the BluGolds’ lead to four. Then Eau Claire’s offense managed to post a 6-0 rally to increase the lead to 21-11. Halverson was spark the Cougars desperately needed, providing key score-after-score. A Halverson lay-up at the 1:08-mark of the first half would again cut the lead, this time making it 30-25. However, the BluGolds were simply too much. In the final minute of the play in the first half, Eau Claire would mount a 5-0 rally to hold a 10-point lead at the half.

Halverson had a stellar day from the floor for the Cougars. In 32 minutes of action, the senior led the team in scoring with 20 points and five rebounds. Nick Peterson was also a bright spot for the Cougars offensively, scoring 11 points, one steal, one assists and a team-high seven rebounds.

The Cougars will be in action Sunday as they play host to Valley City State University in a non-conference tilt at the P.E. Center. Tip-off is set for 2 P.M.