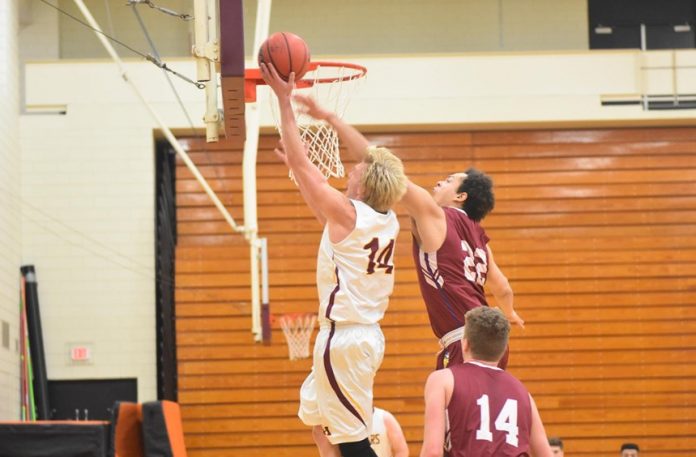 MEN’S BASKETBALL
MORRIS, Minn. – It’s been 10 days since the University of Minnesota Morris men’s basketball team has walked off the court a winner.

It’s been the same length since the Cougars walked off their home court winners as well.The proverbial stars appeared to align for the Cougars Sunday.

With four scorers reaching double-figures, Minnesota Morris was able to snap a three-game losing skid against the Valley City State University Vikings 75-65 inside the P.E. Center in non-conference action.

It was a tale of two halves for the Cougars. James Pendleton gave the Cougars an early 9-6 lead after connecting on a trey from the corner. However, the Vikings managed to creep back into the game, dwindling the lead to 13-10. That was when Trent Jerome simply stole the momentum.

After a few crisp passes left him open at the point, Jerome knocked down a three-pointer to give the Cougars a 15-10 lead. On the ensuing defensive possession, the Sophomore jumped in front of an errant pass and raced down the floor with his lay up extending the lead to 18-10. Jerome had a solid performance for Minnesota Morris off the bench, scoring eight points and recording a steal on just 10 minutes of action.

From there it was all Minnesota Morris.

A pair of Noah Grove jumpers in the paint would build a commanding 28-18 lead. After a 20-point performance the night before, Jeffrey Halverson would score 12 of his 16 points in the first half. A pair of his shots were part of a 10-2 run late in the half. Halverson would finish the contest with 16 points.

The story of the second half was the foul trouble of both teams. In the first three minutes of play, the Cougars had three costly turnovers which immediately turned into chances at the free-throw line for the Vikings. Valley City State had just nine attempts from the charity stripe for the game, but seven came in the second half.

However, despite surrendering free scoring opportunities, the Cougars faced plenty more of their own in the second half. Minnesota Morris went 17-of-24 from the charity stripe, with Grove converting 10-of-his-15 attempts.

It the Cougars weren’t able to get to the line, the stifling defense was good enough to provide easy scoring chances. After a Grove steal and successful lay-up, Minnesota Morris held a commanding 52-44 lead near the midway point of the half. It was a much better performance from the senior guard Sunday, scoring 20 points and recording two steals. He also grabbed five rebounds.

As the clock dwindled to just a minute remaining in the half, the Cougars were sent to the foul line on four different occasions. All attempts were successful. James Pendleton and Trey Heinsuis joined Grove and Halverson in double figures. Pendleton recorded 10 points and five assists while Heinsuis tallied 13 points.

The Cougars (2-3) will travel to Mayville, North Dakota on Sunday to play Mayville State University in hopes of avenging a 86-4 loss to the Comets back on Nov.20. Tip-off is set for 3 P.M.