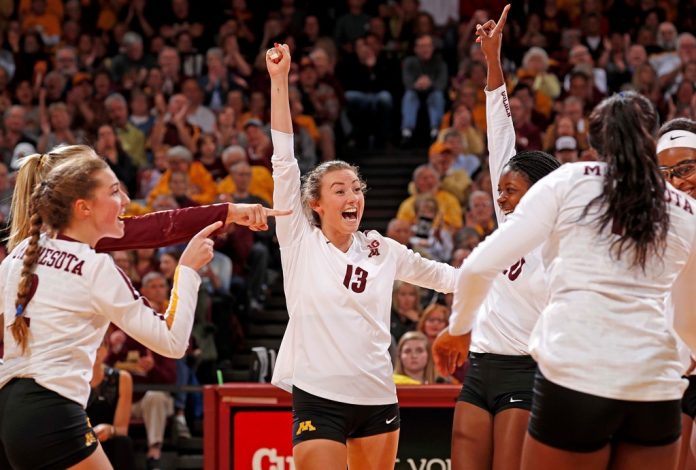 VOLLEYBALL
MINNEAPOLIS – Golden Gophers senior setter Samantha Seliger-Swenson was named the Big Ten Player of the Year and Co-Setter of the Year, announced Wednesday by the conference office. Head coach Hugh McCutcheon was also named Coach of the Year by both media and coaches.

In all, six individuals landed a spot on the First or Second All-Big Ten Team and two were named to the All-Freshman Team.

Seliger-Swenson, Stephanie Samedy and Regan Pittman were named First Team All-Big Ten, while Alexis Hart, Taylor Morgan and Adanna Rollins were on the Second Team. Rollins and CC McGraw were named to the All-Freshman Team. Seliger-Swenson and Samedy were two of 10 unanimous First Team selections.

During the conference season, she was named the Big Ten Setter of the Week seven times. The three-time All-American had 11 double-doubles this year and added 1,141 assists. In her career, she enters the postseason with 5,557 career assists and over 1,130 career digs. A four-year starter for the Golden Gophers, Seliger-Swenson completed the trifecta as she was named the 2015 Freshman of the Year, a two-time Setter of the Year (2016, 2018) and now Big Ten Player of the Year.

Receiver Tyler Johnson was named All-Big Ten First Team by the media and second team by the coaches. The junior receiver was second in the Big Ten with 74 receptions for 1,112 yards and 10 touchdowns which ranked third.

Johnson is the first Gopher to be named All-Big Ten First Team on offense since offensive lineman Zac Epping in 2014.

Running back Mohamed Ibrahim, who has rushed for 936 and seven touchdowns in nine games, was also named All-Big Ten Honorable Mention by the media.