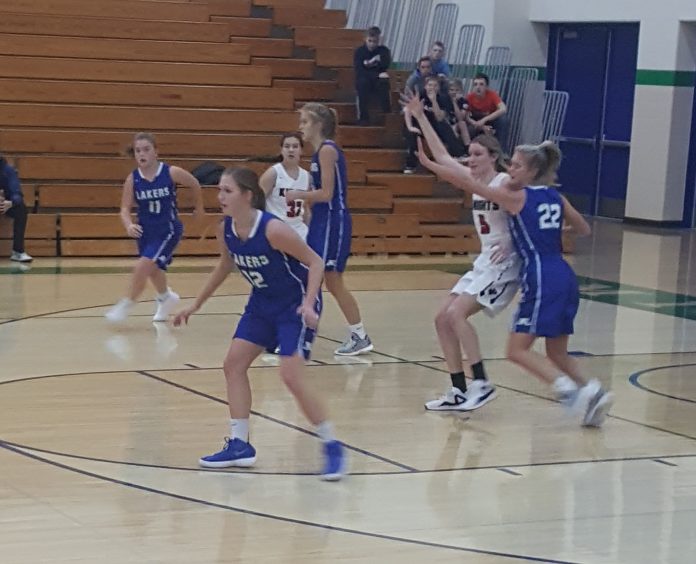 Minnewaska Area 63, West Central Area 53
GLENWOOD – Emma Thorfinnson’s three-pointer early in the second half gave Minnewaska their first lead of the game, erasing a nine-point deficit and helping the Lakers earn a 63-53 win over West Central Area.
Thorfinnson hit four of her five threes in the second half, finishing with 23 points. Ellie Danielson scored 23 with eight rebounds, and Lexi Piekarski pulled down 10 rebounds while scoring eight points for the Lakers who are 2-1 on the season.
Lexi Bright led the Knights with 15 points, Ella Van Kempen had 14 with six rebounds, and Hailey Bennett added 10 as they fall to 0-2.

Brandon-Evansville 40, Henning 32
HENNING – Brandon-Evansville held Henning to just nine first half points and held on late for a 40-32 win.
The Chargers were shorthanded and dealing with foul trouble, depth and their ability to find ways to break the Hornets ball-pressure defense.
Mikenna Pattrin led with 10 points, Sara Jacobson had nine and the Chargers are 1-1 on the season. The Hornets got nine points from Abi Eckhoff but fall to 0-2.

Waseca 7, Morris/Benson Area 0
WASECA – Jayde Peterson tallied two goals with three assists to lead Waseca past Morris/Benson Area 7-0 in girls hockey.
The Blue Jays opened with two goals in the games first three minutes, adding three in the second period, and two more in the third. Erin Volkmer stopped 13 shots and the Jays are now 2-3.
Leah Thompson made 27 saves for the Storm who fall to 1-8.