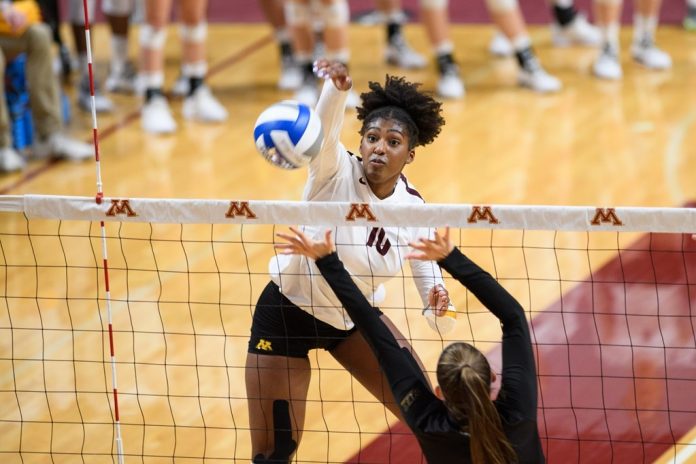 VOLLEYBALL
MINNEAPOLIS – The No. 2 seed University of Minnesota volleyball team defeated Bryant University in straight sets (25-10, 25-16, 25-21) tonight, at Maturi Pavilion in front of 5,101 fans. With the win, the Golden Gophers advance to the Second Round of the NCAA Tournament and improve to 26-3 overall.

Alexis Hart led the team with 12 kills and hit a team-high .478. Taylor Morgan added eight, hit .467 and chipped in a team-best nine blocks. Adanna Rollins put up seven and had nine digs. CC McGraw led the team with 14 digs and was followed by Stephanie Samedy with 13. Samantha Seliger-Swenson recorded 31 assists, three service aces and nine digs. The Gophers outhit the Bulldogs .280 to .008 and held a 16-2 block advantage. As a team, Minnesota had 35 kills and 54 digs while Bryant had 33 kills and 55 digs.

The Gophers will face South Carolina tomorrow night, who defeated Colorado in five-sets.

Jordan Murphy scored a season-high 24 points to lead five players in double figures, and he added 16 rebounds to lead the Gophers to an 83-76 win against Oklahoma State on Friday night as part of the U.S. Bank Stadium Basketball Classic.

Minnesota has beaten Utah, Texas A&M, Washington and now the Cowboys before leaving for a game at No. 16 Ohio State.

“We’ve beaten a Big 12 team, two Pac-12 teams and an SEC team, and I don’t believe it’s December yet,” Pitino said after the win. “It’s worth it to play in this venue. I thought our fans were awesome. Our fan base is really, really underrated.”

Gabe Kalscheur scored 14 points, hitting three 3-pointers in the second half for the Gophers (6-1), who overcame their first loss of the season at Boston College. Isaiah Washington added 15 points for Minnesota.

Lindy Waters III led Oklahoma State with 18 points. Waters hit 4 of 6 from 3-point territory. Michael Weathers added 17 points for the Cowboys, who play five freshmen and only have one senior.

“We’ve got to be better,” Oklahoma State coach Mike Boynton said. “We’re a team that’s continuing to find out who we are. A month from now, I think we’ll be much better for this experience.”

“Free throws have been an issue,” Boynton said. “It’s something we need to address, for sure.”

The Gophers started slow in the expansive football stadium, leaning on an attacking Murphy, their senior forward who was named to several player of the year award watch lists. Murphy scored 13 of the team’s first 18 points.

Two 3s from Dupree McBrayer and Kalscheur pushed Minnesota to its biggest lead of the game at 18 points in the second half. But the Gophers went without a field goal for more than four minutes and Oklahoma State closed within 77-73.

“Our sense of urgency just picked up,” Waters said. “On the defensive end, we started executing traps, rebounding, help side, knowing the personnel and then executing offensively. Not being afraid to make a mistake on the offensive end because, you know, trying to make a comeback you want to be as aggressive as possible.”

The Gophers were 23 of 30 from the free-throw line to close out the game.

“I think it’s huge with momentum being 6-1, obviously coming off a win going into Sunday and then again on Wednesday,” Murphy said. “We definitely just got to pay attention to the scouting report and game plan coach has set out for us and just be ready.”

Oklahoma State: The Cowboys couldn’t follow up their win against No. 19 LSU on Sunday. Oklahoma State has six wins over ranked opponents in coach Mike Boynton’s two seasons but has had letdowns, too. The young Cowboys experienced a unique setting on Friday that could serve them well down the road.

Minnesota: Another neutral-site victory should help the Gophers in their bid to return to the NCAA tournament. Minnesota will have the strength of schedule of playing in the Big Ten and has now won four neutral-site games already this season after going 3-0 at the Vancouver Showcase.

Murphy finished with the 51st double-double of his career, tying Jim Brewer for the most in school history.

“He’s so productive,” Pitino said. “I don’t think it’s anybody else. He’s just insanely productive. He’s one of the more productive players I’ve ever been around. It’s not always pretty, but he just finds a way. Sixteen rebounds like it was nothing.”

The game is part of a four-game showing at U.S. Bank Stadium in preparation for hosting the 2019 Final Four. The three-year stadium hosts the NFL’s Minnesota Vikings and was the site of the Super Bowl in February.

UP NEXT
Minnesota goes to Ohio State on Sunday.

MEN’S HOCKEY
MINNEAPOLIS – Rem Pitlick scored the game-tying goal with 41 seconds left in regulation as the Gopher Hockey program opened this weekend’s Big Ten series with a 2-2 overtime tie against No. 5 Ohio State at 3M Arena at Mariucci. The Buckeyes went on to claim the conference bonus point by scoring 4:24 into the 3-on-3 overtime session.

Special teams played a role in both of Minnesota’s goals in the series opener as well as Ohio State’s deciding goal in the second overtime period.

The Gophers (4-6-2 overall, 2-2-1-0 Big Ten) opened the night with a shorthanded goal from Ryan Norman at 14:33 of the first period. The senior forward tallied his second goal of the year off an assist from rookie forward Sammy Walker, who now has points in five of the last six games.

Trailing late in the third, Minnesota benefited from a Buckeye penalty, and Pitlick converted with the extra-attacker goal at 19:19 to force overtime. After being set up for Tyler Sheehy and Clayton Phillips, Pitlick blasted a one-timer into the net for his team-leading sixth goal and 11th point of the year. Meanwhile, Sheehy now has five points in the last three games while all three Gophers are now riding three-game point streaks.

Pitlick nearly struck again in the 5-on-5 overtime session only for Buckeyes goalie Sean Romeo to make a game-saving swipe at the puck to continue the action. While the game officially closed as a tie after the first overtime period, Ohio State claimed the extra Big Ten point when Matt Miller tallied a power-play goal at 4:24 of the 3-on-3 overtime session.

Romeo picked up the win for Ohio State, moving to 4-3-1 after a 21-save showing. Mat Robson took the loss for Minnesota, making 30 saves to move to 3-3-2 on the year. After outshooting opponents in five-straight games, Minnesota was outshot 23-33 by the Buckeyes in the series opener.

The Gophers close out a six-game home stand tomorrow against Ohio State at 3M Arena at Mariucci at 4 p.m. Tickets are available at MyGopherSports.com.

Minnesota was two-for-three on the power play while holding Yale (2-9-0, 2-6-0 ECAC Hockey) scoreless on two power-play opportunities. The Bulldogs’ lone goal was a shorthanded tally by Claire Dalton.

Sydney Scobee made eight saves for the Gophers in her first game since Oct. 28, and Minnesota outshot Yale, 46-9. In net for the Bulldogs, Tera Hofmann finished with 17 saves on 22 shots faced in the game’s opening 33:04 before Kyra O’Brien played the last 26:56 and made 22 saves on 24 shots for the home team.

The teams meet in game two of this week’s non-conference series at 2 p.m. Saturday.