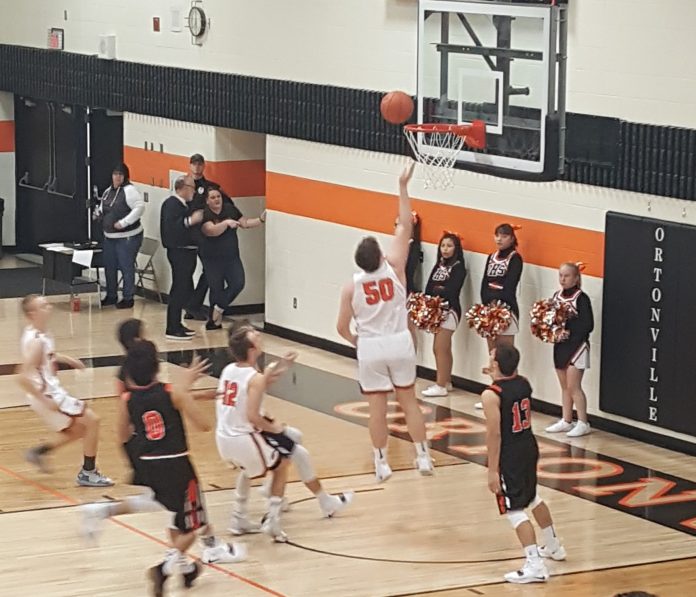 Morris Area/Chokio-Alberta 64, Ortonville 57
ORTONVILLE – Morris Area/Chokio-Alberta opened the game on a 12-0 run and never trailed in a season opening 64-57 win over Ortonville on Friday.
The Tigers led by as many as 21, holding the Trojans to just 33 percent shooting and without a field goal for the first 9:21 of the game.
Jaret Johnson was 5-6 from three-point range to finish with a game-high 29 points and nine rebounds. Jackson Loge blocked three shots while scoring 16 points and pulling down seven boards. Camden Arndt added 11 points, seven rebounds, and six assists.
DaVonte Edwards led the Trojans with 19 points and eight rebounds, Zach Kuechenmeister added 13 points.

Morris Area/Chokio-Alberta 60, Benson 43
BENSON – Riley Decker scored 12 points and Liz Dietz added 11 and Morris/Chokio-Alberta won their season opener with a 60-43 defeat of Benson at the Case IH Invititational from Benson.
Malory Anderson had nine points, seven rebounds and six steals. Maddie Carrington scored nine for the Tigers. Claire Ricard had 20 for the Braves.

Davin Rose was champion at 113, while Dalton Rose took top honors at 160.

As a team the Tigers finished fourth out of 11 teams with a score of 122.5. The BBE Jaguars were team champions with a 172, Willmar was runner-up while Benson took third.