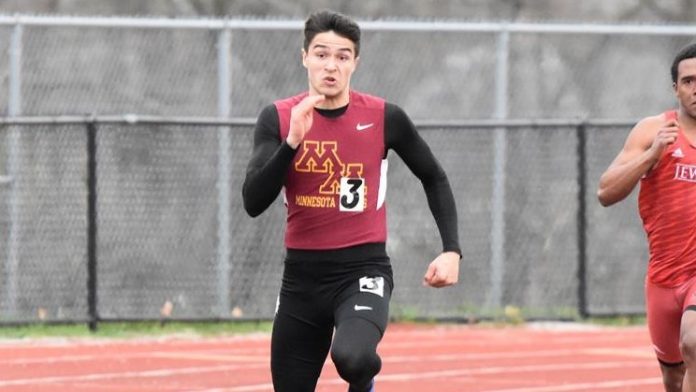 INDOOR TRACK & FIELD
BROOKINGS, S.D. – The University of Minnesota Morris track and field team competed at the South Dakota State Holiday invite over the weekend in the Sanford-Jackrabbit Athletic Complex.

On Friday, A handful of runners for the Cougars not only competed, but recorded personal bests in their respective events.

“Overall fantastic meet!, noted Head Coach Jessica Devine. “It’s always hard to tell where we’re at this time of year once we get inside without full facilities. But they pretty much blew our expectations out of the water!”

Justin Pearson set a new school record in the 60m dash, blazing down the track with a time of 6.99 seconds. The sophomore from Elk River, Minn. would would record a 7.04 in the finals of the event. Trent Merkins recorded a personal best in the shot put, throwing 13.68 meters. The distance was also good enough for fifth all-time in program history.

In the Women’s 60m event, Jenna Benson would also make the record books, recording the program’s second fastest time (8.07) in the second heat of qualifying. She would not qualify for the finals. Emily Ciesynski recorded a personal best, running a 60.67 in the 400m dash, which Head Coach Jessica Devine noted would convert to a 61.48 on a 200m track.