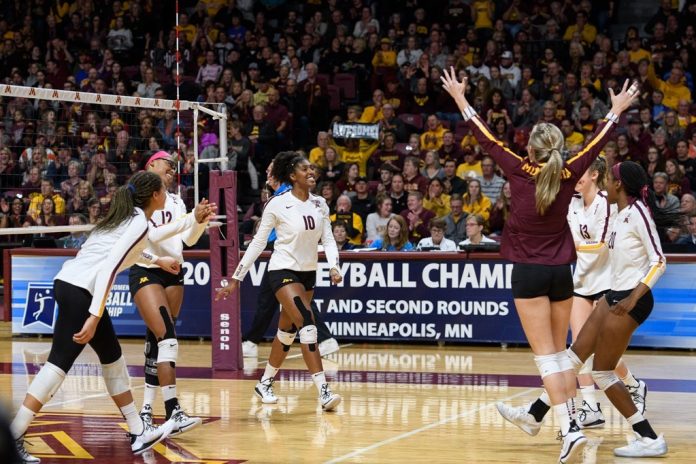 VOLLEYBALL
The No. 2 seed University of Minnesota volleyball team advanced to the Regional Semifinal after topping South Carolina in three sets, 25-12, 25-15, 25-15, tonight at Maturi Pavilion. With the win, the Gophers improve to 27-3 overall and are one of 16 teams remaining in the NCAA Championship.

Stephanie Samedy led the offense with 12 kills (hit .345) and added seven digs. Regan Pittman hit .600 with nine kills, six digs and a team-high four blocks. Adanna Rollins posted eight kills and 11 digs, while Taylor Morgan chipped in six kills. Samantha Seliger-Swenson put up 31 assists, and contributed four kills and three aces. In the back row, CC McGraw recorded 11 digs and was followed by Lauren Barnes who had eight. As a team, the Gophers outhit South Carolina .384 to .147 and held a 46-29 kill advantage. They finished with 52 digs and six blocks while the Gamecocks had 37 digs and two blocks.

MEN’S HOCKEY
MINNEAPOLIS – For the second night in a row, Gopher Hockey rallied for a 2-2 overtime tie with No. 5 Ohio State only to again see the Buckeyes nab the conference bonus point by scoring in the 3-on-3 overtime session at 3M Arena at Mariucci.

After falling behind by two in the first period, the Gophers (4-6-3 overall, 2-2-2-0 Big Ten) responded with tallies from Sam Rossini and Brent Gates Jr. while Mat Robson made 43 saves in net for the Maroon & Gold – a new season high for the junior goaltender.

Ohio State (9-4-3, 4-2-2-2) jumped out to a two-goal lead in the first period as Brendon Kearney scored at 14:27 and Mason Jobst added to the lead with a power-play strike at 15:46. But the Gophers quickly cut the lead in half when Rossini picked up his first point of the year with a goal at 17:25 of the first session to snap a 12-game goal drought for the sophomore defenseman. Tommy Novak and Sampo Ranta picked up assists on the Gophers’ opening goal.

Robson backstopped a Gophers team that was outshot 46-17 overall (45-16 officially) on the night for his highest save total of the season at 43 (besting his 42-save performance against Minnesota Duluth on Oct. 7). The junior moved to 3-3-3 on the year while Tommy Nappier made 15 saves for the Buckeyes to go to 5-1-2.

Minnesota was 0-for-3 on the power play on Saturday night and 4-for-5 on the penalty kill, surrendering a power-play goal for the first time in five games.

Minnesota closes out the first half with a two-game, Big Ten series next weekend at Michigan.