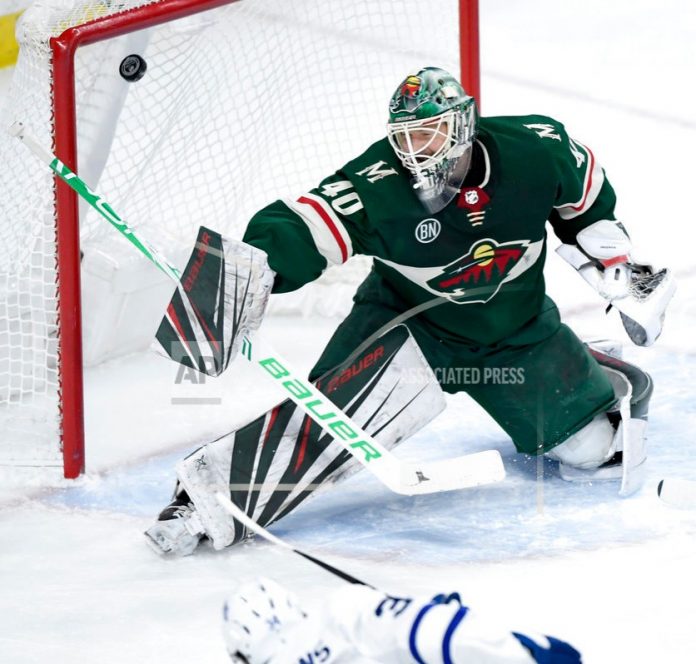 Nazem Kadri broke a tie with 3:20 to play and Zach Hyman scored twice in Toronto’s 5-3 victory over the Minnesota Wild on Saturday night.

Hyman added an empty-net goal in the final minute to seal Toronto’s fourth straight victory and Minnesota’s third loss in a row. The Maple Leafs improved to 19-8-0, a point behind Tampa Bay for the NHL lead.

“I thought we started OK and then I don’t know if we thought it was going to be easy or whatever,” Toronto coach Mike Babcock said. “We were resilient and found a way to win.”

Kadri’s goal bounced off Wild defenseman Nick Seeler, who was on the wrong end of two such plays Saturday. Seeler also had a puck deflect off him and into his own goal when Tyler Ennis scored Toronto’s second goal of the night.

“A couple bad breaks there, and inopportune times. That’s disappointing,” Seeler said. “Not much you can do there. It gets hit off you and goes in, and I did everything I can to try to stop it going in.”

Auston Matthews also scored, and Frederick Anderson made 38 saves for the Maple Leafs for his 15th victory of the season.

The win came after news broke that Toronto signed restricted free-agent William Nylander to a six-year extension, ending an impasse with his contract. Saturday was the deadline for a deal to be done.

“It’s great news. We hope to get him here as soon as possible,” Matthews said. “He’s a big part of this team. Hopefully, he gets us on a run here.”

Toronto’s players found out the news before the game when Babcock emerged from his office to tell them Nylander had signed. Forward Mitchell Marner said the players in the locker room immediately grabbed their phones upon hearing the news.

“We’re all really excited about it,” said Marner, who had two assists in the win. “We can’t wait to get him back in Toronto.”

Matthews scored Toronto’s first goal, his third in two games since returning from a shoulder injury that sidelined him 14 games. The goal was his team-high sixth power play goal of the season.

Toronto improved to 12-3-0 when being outshot by its opponent. The Maple Leafs were outshot 41-23 by the Wild on Saturday and 18-8 in the third period.

Minnesota forward Jason Zucker got some redemption in the third period to even the game. After missing a wide-open shot for what would have been the equalizing goal, Zucker eventually tied it later in the period.

Zucker scored his eighth goal of the year at the 9:38 mark of the third on a pass from Mikael Granlund to make it 3.

Saturday was just the third-ever victory for the Maple Leafs in 10 games at Xcel Energy Center. Toronto last won in St. Paul back on March 22, 2011.

Eric Staal and Jordan Greenway also scored for Minnesota, which lost consecutive home games for the first time all season.

“That’s a great game by us,” said Wild goalie Devan Dubnyk. “When we play a game like that, that’s just not going to happen again.”

NOTES: Toronto F Mitchell Marner had two assists to bring his season total to 32 – a Toronto record for the most assists through 27 games. … Wild D Ryan Suter has five assists in his last five games after setting up Staal’s first-period tally. … Toronto D Morgan Rielly had his 200th career point with an assist in the first period.

Wild: At Vancouver on Tuesday night.