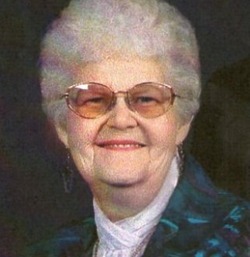 Visitation for Faye Johnson will be held Saturday, May 4, 2019, one hour prior to service time at Good Shepherd Lutheran Church in Wheaton, MN.

Funeral Services for Faye Leone Johnson will be held Saturday, May 4, 2019, at 2:00 p.m. at Good Shepherd Lutheran Church in Wheaton, MN, with Rev. Cheryl Berg officiating. Organist will be LeAnn Bjornson with special music by music groups aCord, Men of Note, and the Anderson Quartet. Burial will be in Wildwood Cemetery.

Faye Leone Strandin was born on July 12, 1923, in Bethel, MN, to Paul and Ada (Dawson) Strandin.  She attended elementary school in Bethel and graduated from St. Francis (MN) High School in 1941. After graduation Faye worked as a stenographer and bookkeeper at the local dairy.

Faye met Allen Johnson during his last furlough in the States before being shipped to Europe in 1942.  While Allen was overseas Faye and her best friend Dorothy Ledin traveled to California to be close to her brother Raymond before he shipped out with the Marine Corps.  She worked at North American Aviation in Pasadena where she riveted the ailerons on the wings of P-51 Mustangs.  Yes, she was a real-life “Rosie the Riveter”.  After about a year, she returned to Bethel and worked for her brother in law, Floyd Hanson in his department store.  She wrote Allen every day until he returned to Bethel soon after his Oct. 4, 1945 discharge from the Army and they were married on Jan. 16, 1946 in Columbia Heights, MN.

On April 3, 1947 their son, Dennis, was born.  On June 1, 1947 she was baptized along with her newborn son at the Bethel Community Church.  They lived in Wheaton, MN where Allen worked for the REA.  They later lived in Bethel, MN, where Al worked at the St. Paul Ford Plant and US Arsenal in New Brighton and Faye worked part-time as a telephone operator, and later in Rosholt SD, where they operated a grocery for Ernst Lindig.  In 1952 they moved back to Bethel where Allen worked as lineman and manager of the telephone company and Faye worked for Floyd at his grocery store in St. Francis.  In 1959 they moved to Blooming Prairie where Faye worked as a telephone operator and Allen was a lineman; In1960 they moved back to Wheaton where she worked at the Wheaton Department Store and Al managed the phone company;  1968 – back to Blooming Prairie, Al working with the same telephone company and Faye working in Owatonna for Federated Insurance.  Finally in 1976 they returned to Wheaton where Al had always wanted to retire.  Al with the telephone company and Faye doing bookwork for the department store.  They retired in 1981.

Allen and Faye loved to travel.  Their first big trip was in 1959 and in the intervening years they traveled to every state west of the Mississippi and the Deep South.  They especially loved the mountains of Glacier Park where Faye was scared to death of mountain roads.  They made sure they visited Denny wherever he was stationed in the Navy, including the Philippines.  The trip of a lifetime – they even experienced their first earthquake.

Faye was a wonderful pianist.  In her notes passed down to us, Faye’s mother, Ada, wrote, “At four years Faye is quite a piano player, can play little things by ear, she can sing too.”  All she had to do was hear a song a few times, know the melody and the brain took over.  She played for Santa Claus day is Wheaton for many years and just used a list of Christmas songs and would play one after another.  She also played for sing-a-long at Traverse Care Center for over 25 years.  Faye was extremely service-oriented.  She was a Lady Lion and was active in both American Legion and VFW Auxiliaries. She was also active at GA church and later Good Shepherd.

Faye was preceded in death by her parents, a brother Raymond, and sisters Joyce and Marvel.

Arrangements are with Ranney-Bainbridge Funeral Home in Wheaton.